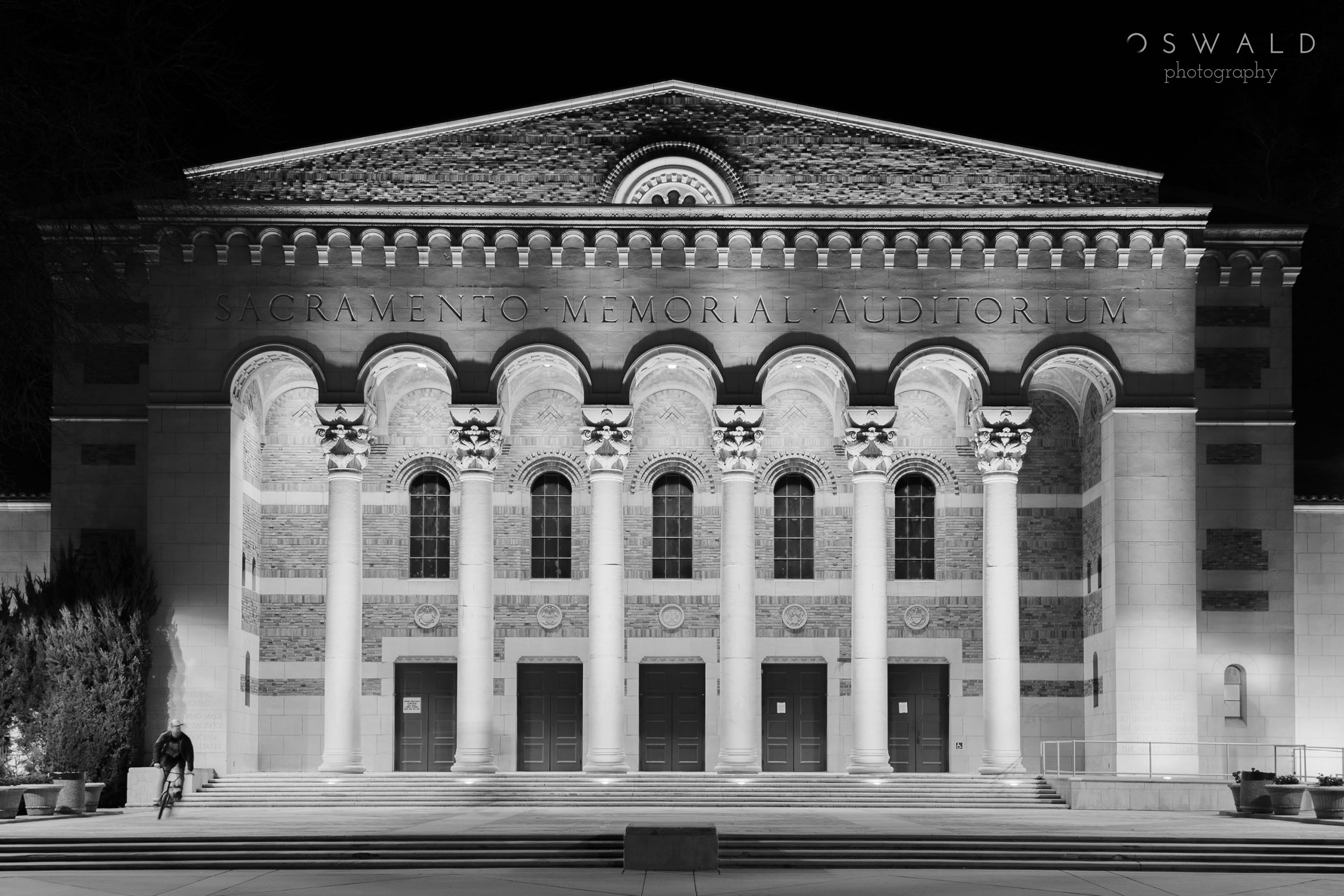 One of the highlights of downtown Sacramento is The Memorial Auditorium. Not only is it a beautiful example of architecture from another era, but it is a place that has birthed a lot of treasured memories.

And now I’ve got a new image of the place in my mind, made more beautiful by the fall of night and the presence of a biker.

The Memorial Auditorium was built in 1926 to serve as Sacramento’s premier performance center. It was built with great care for purpose, seating nearly 4000 people in a spacious and ornate main hall. Though it was also constructed with design in mind. The entry way is certainly impressive with its towering colonnade, though a walk around the its grounds shows that even the sides and rear of the building were constructed with care. The brick and stone work here lends the building a timeless air that contrasts powerfully against so many of the surrounding tattoo parlors and business offices.

For reasons I don’t know, the auditorium fell into disrepair over the years and by 1986 it had closed entirely. Thankfully, it was not bulldozed but instead left in place until 1996 when some community restoration efforts resuscitated its environs and booking schedule. It now hosts concerts, comedians, inauguration ceremonies for California governors, and plenty of high school graduations. Like my own!

Yes, I graduated from high school in the Memorial Auditorium. I’ve attended friends’ graduations here. I once delivered a speech from the stage. And from the balcony, I saw the Newsboys perform a dueling, gravity-defying drum solo. I’ve had lots of fun and some sobering times in this place, and I’m grateful to know it is part of the soul of my town.

I made a new memory here recently during a night-time photo shoot of downtown Sacramento. I knew that the recent installation of flood lighting turned the architecture of the Memorial Auditorium into a bewitching sight to all the J Street traffic. I wanted to shoot it myself. I arrived around 9:30pm on a weeknight, assuming that the place would be lit up and empty. I was only half right.

There were no shows happening that evening and so the building was locked but well-illuminated. Yet the courtyard steadily drew local skaters and bikers. I guess each one of us came expecting to have the place to himself. At first I was a bit annoyed that I could hardly get a shot of the place without the motion blur of a biker pulling a wheelie, or a skater eating pavement. But then I mellowed out and realized that we were all here to enjoy a special place in our city.

In the end, I captured a few good photos of the Memorial Auditorium without people on wheels in the frame. When I got a chance to see the photos on my computer screen, I loved the contrast of night against the illuminated curves and sharp angles. But I finally decided that the ol’ place felt more true to life with a hint of humanity in the picture.

So here’s to you, late-night biker, and your taste in wonderful spots to while away a Sacramento evening. I’m right there with you.

Bonus points if you can spot the location of the burnt out light bulbs in this photo! Give your answer in the comments.