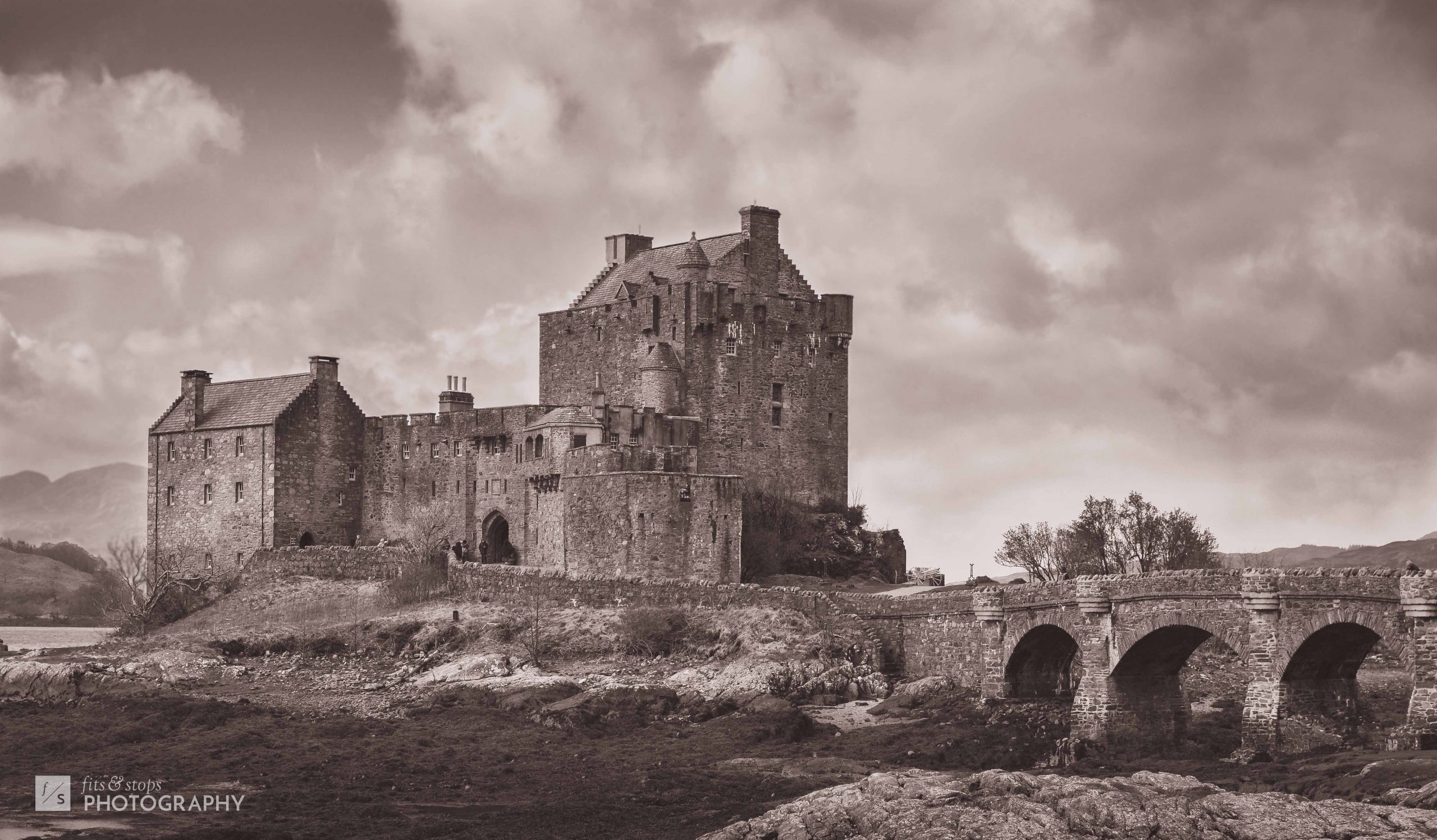 Since I’ve never starred in an episode of Downton Abbey myself, I suppose our tour of Eilean Donan castle was the closest I’ll come.

The day began rainy, and it ended rainy as well. That’s what we had signed up for on our family trip to Scotland. Our own family forecast of rain meant that that any hours of sunshine were that much more unexpected and sublime.

On our rainy drive from Portree to our next stay in Glencoe, we rumbled with diesel power up some of the tallest hills in Scotland. Admittedly, there are scarcely mountains in Scotland, but to drive above the countless Highland hills for once was a real treat. Sometimes we could spot narrow Lochs stretching out alongside us. In other instances, clouds plunged down beneath us so that it looked like we must have been driving up in heaven with the Earth obscured below. Erica had to keep telling me to slow down, since these heavenly roads were moist.

What came up had to come down at some point. And when we did come down, we happened across one of the most beloved castles in all of Scotland—bathed in sunlight.

We crossed a bridge that passed through the town of Dornie and spotted a strangely familiar sight: Eilean Donan castle. We had passed by quite a few other castles, often in ruins, as they mark the countryside of Scotland wherever a family of means felt it necessary to stake their claim. But why might this one be familiar to an American like me? Well, it shows up on pretty much any calendar of Scotland for one, not to mention about a hundred different postcards we saw in each petrol station we had stopped at. It has even made appearances in Highlander and the not-so-popular James Bond movie The World Is Not Enough.

Regardless of the castle’s reputation, we pulled over to explore Eilean Donan for ourselves.

It turns out that this castle sits on a tidal island at the junction of Loch Duich, Loch Long, and Loch Alsh. Before the addition of a bridge in the 19th century, had no access to the surrounding land until low tide. It is speculated that the island had once been home to a Christian monastery, supposed by the monks to be safe from those pesky Norwegian Vikings. As time marched on, the lairds (Scottish lords) deemed it vital to build a fortress on the island as it could help defend against any waterborne attackers. The clan Mackenzie, and later the clan Macrae, began to occupy this area through many years of war and civil war, building the structure into a castle suitable for living and defending. In 1719 the castle was blown to smithereens by a relentless cannon barrage during the Jacobite Rebellion: one more pile of ruins to tourists to pass by over the centuries.

But the story continued, and the castle was given another chance at life. When one of the Macrae clan returned from World War I, he rebuilt the castle from rubble into a suitable home along with a bridge. The family dwelled there in opulence until 1955 when they moved out and gave the castle over to Scotland. Except for on holidays and weddings, when they’d like the castle back for a bit of over-the-top celebration, you see.

It was this opulent iteration of Eilean Donan castle that we explored. We crossed the lavish bridge, with violent wind whipping the blue and white of the Scottish flag with a crack. Each step we took caused the castle to grow larger than I expected. While the exterior of stone cast the place with a cold feel, that changed as we stepped inside the wooden doors. We first came to the banquet room, filled with a tremendous table and ancestral portraits hanging over the walls. Beautiful rugs laid over the top of the stone floors, and a gaping fireplace offered the promise of warmth during cold Scottish winters. And in place of balconies, there were entire parapets to stroll along with the stunning lochs for scenery.

The castle was also surprisingly homey. Consider the many bedrooms; some were decorated with ornate details for the adults, and some with brighter colored furniture for the wee ones. One wrong (or right) step could have taken me to Narnia, based on the wardrobes I spotted inside. Even the kitchen smacked of life, with large windows letting in northern light upon cutting trays, and a tremendous assortment of pots and pans. I could imagine all the kitchen staff of Downtown Abbey filling the room at the holidays, rushing to get each element of the meal out of the oven and to the family at the right time. This room must’ve been the warmest and tastiest of all.

I could tell that my little ones’ imaginations were running at full tilt as well. Kali pretended to be queen, turning her nose up higher than normal and speaking to her brother William with a commanding tone. He was too busy pretending to be a soldier though, fighting off some unseen horde with an imaginary sword (I’ve learned well enough that my little guy probably shouldn’t ever be given a tangible sword).

A place like Eilean Donan castle is loaded with history. Generations of Scots, poor and wealthy, bellicose and peace-loving, faithful and heathen, have occupied this beautiful space. The wonderful state of preservation betrays just how much life it has experienced. The magic of Eilean Donan also fires the imagination, just as it did that windy, sunny day for us Oswalds. Perhaps that’s why I chose to create the moody, vintage vibe for my favorite photo of the castle.

Now if only the kitchen were serving lunch that day…

Have you ever visited a castle yourself? Tell us where in the comments below…