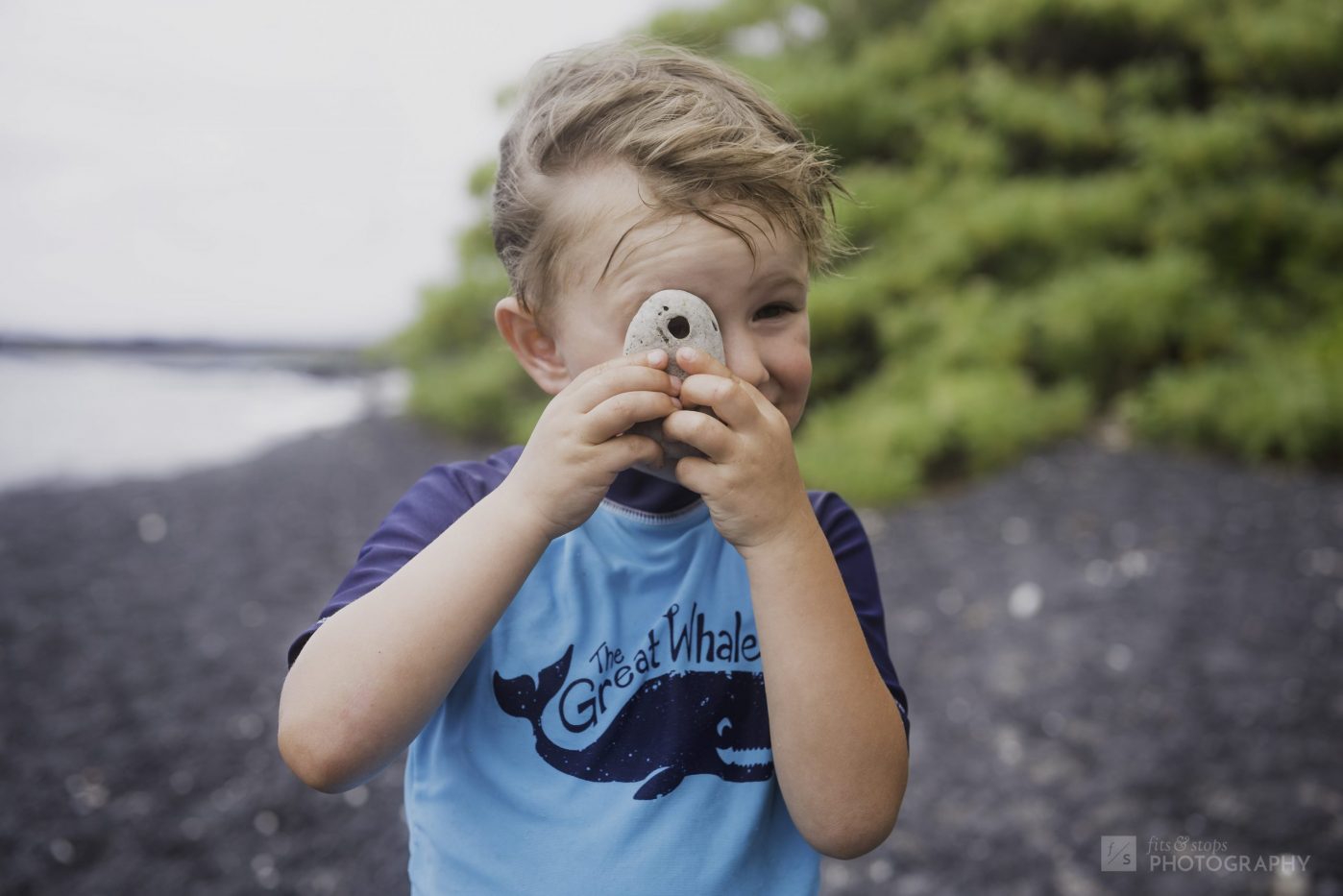 On a black sand beach covered with rocks, he chose this one. He clutched the little stone with the same joy he might muster for a Christmas gift (or for the empty cardboard box the gift came in). If I’ve learned anything from him, it is that wonder can surface in plain sight.

After all, he found it. It was his. It was special.

It had already been an eventful day at Kiholo Bay. William had narrowly escaped the attack of a green sea turtle during our walk-turned-hike along the beach. And with a stomach bug blunting grandpa’s interest in finishing the hike we didn’t know how much further the walk would continue. That, and our 18 month old had gone from walking to being dragged along the sand. Perhaps that African proverb about going together and going far isn’t always true.

Grandpa Jeff took a seat at an unexpected bench there on the beach, nursing his ailing belly. Meanwhile, my wife plucked some snacks from her backpack to keep the kids upright as long as possible. I was grateful for her foresight in packing some food, since I hoped not to have to hoist three kids and grandpa all the way back to the car on my back. Come to think of it, that might have made for a great photo … now, where was I?

William explored this otherworldly beach while we rested. He happened across a rock with a pinky-sized hole punched all the way through it. Imitating his dad, he ran across the beach snapping pictures with his camera made of stone. He gave his older sister and younger brother a peek through the “viewfinder” from time to time, for they were eager to get in on the fun as well.

Finally he paused, and with a curious look said, “Daddy, who made this?”

A bit tired from the hike, I responded with a lazy, “Hmm. Good question.” This was enough to satisfy him. But it surprised me to hear him realize that this rock (a fishing net weight) was “made”, and the millions around him were not.

One of the Bible’s many Psalms includes a lyric that reads, “I praise you, for I am fearfully and wonderfully made. Wonderful are your works; my soul knows it very well.” (Psalm 139:14) The songwriter David revels in just how deeply God knows and understands him. That knowledge comes not only from a vital relationship that the two had, but as a result of the fact that God designed the very blueprints for David. Sure, David’s mom and dad had something to do with his genetic makeup. But David recognized the incredible craftsmanship in his design … and in the design of others.

I’ve grown up around that scripture, and wondered many times at just what it might mean. It seems to suggest that God has made David (and me and William and you) in ways and means that are 1) fearful and 2) wonderful.

“Wonderful” seems straightforward enough. The talents, skills, weaknesses, tendencies, and uniquenesses inside David caused him to awe at the one who made him this way — and at how he differed from others. God made us all with a signature style that causes us to give credit not to ourselves, but to the artist behind each masterpiece.

“Fearful”, on the other hand, is not so simple to decipher. When the word “fear” appears in scripture, it may be used to convey that someone is afraid of what fate may befall them. Though fear can also describe a reverence toward God, who is so much more knowledgeable, powerful, and capable than any living being on Earth. He is a God with the power to topple societies and upend our way of being like a kid roasting ants with sunlight and a magnifying glass. Instead, He is so lovingly invested in our future and wellbeing. God made us with a signature style that causes us to note His superiority and power.

To be fearfully and wonderfully made by God was then a badge of honor that David wore with gratitude. Three thousands years later, I wear it with the same delight.

Our afternoon at the beach reminded me of the little touches in our world that cause us to recognize the designer of it all. In William’s case, the little camera rock caused him to wonder at why at rock might have a hole in it. In my case, my little boy’s spunk and personality — and his difference from me — caused me to wonder at how God has made each of us with fresh purpose and design. He has thrown away the proverbial mold in making each one of us, all for the better.

When was a time you were amazed by someone’s unique design? Tell us in the comments below!