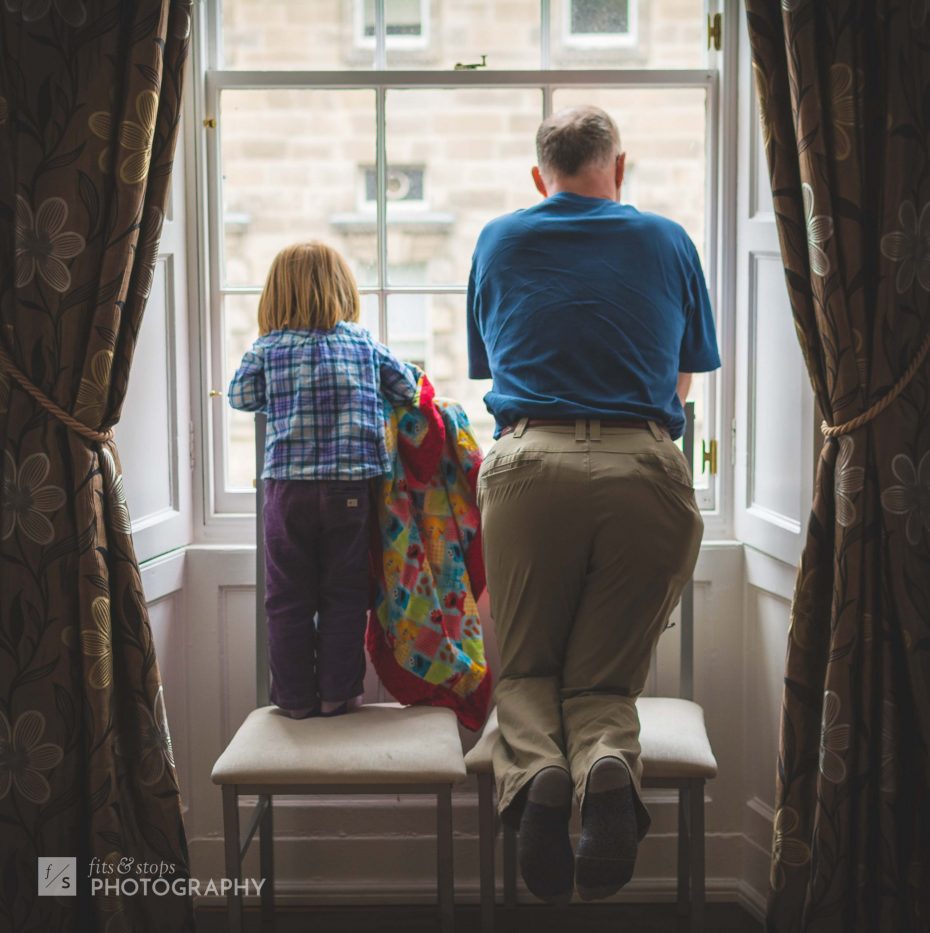 There are many feelings that I wish I could bottle, only to save away for some other time that I’m feeling thirsty for that sentiment. This moment of promise was precisely one of those times. Had it been bottled, I believe it would have aged quite nicely.

We had arrived in Edinburgh, Scotland with high spirits and low-hanging eyelids. After 20-something hours of travel time with two little children who fought sleep at every turn, all of us were in need of a good night’s sleep.  Yet sleep wouldn’t come for some time. We stayed awake thanks to the power of a guided bike tour around town, and the long-awaited meetup with grandma, grandpa and auntie (it had been months since we’d all been together). Those bursts of adrenaline kept us going until nightfall, which was vital to the success of our plan to adjust to the new time zone. Not long after dinner, we crashed at our rented apartment and slept deeply.

I first opened my ears. They heard the sound of muffled, familiar voices from the kitchen. I smiled. I opened my eyes next. They were grateful for the thick curtain which blocked out the morning sun, keeping my wife and kids dozing. I opened my blankets and rolled quietly out of bed, though the old floorboards creaked with each step. No matter. My family was out cold.

I joined my mom, dad, and sister-in law in the kitchen, giving hugs that felt as though they were the first we had exchanged on the trip. They weren’t, of course, but these were the first that weren’t blunted by hours of bleary-eyed transatlantic travel. I grabbed a crumpet and munched as I listened to the sort of sweet stories you only tell when you’ve got piles of time together. Imagine you’re talking on the phone for a few minutes with far-off family–you tend to share the need-to-know stories that are higher on the priority list. We had no need to rush at this point, and just let our lives over the past year spill out in hushed tones that might keep the sleepers sleeping.

After an hour, my daughter awoke and stumbled out into the living room. It seemed her body had started moving before her mind, and she stood staring at the strange new room for a few minutes. I gave her a hug, and grandpa gave her a bigger bear-hug that rattled the sleep from her bones and her mind. She smiled. She spotted a large window at the side of the room, which flooded the room with light. Noise from the busy Royal Mile below filtered through that window into the room.

Wanting to see what was up, she dragged a chair over the window to peer down onto the street. Grandpa followed suit, and set his chair right next to hers. I had already looked down before them to spy a man tossing swords and blowing fire. There were musicians, as well as shoppers surging through the middle of the streets where no cars were permitted. When the two of them saw what I had seen, they just watched and smiled and watched some more…and I snapped a photo.

It was in that moment we had truly arrived. The weight of travel was lifted and the trip was about to really begin. We were each clear-eyed and eager for what was to come. Our minds raced with the promise of what could happen when we set foot out of the apartment into this new world. I know I was grateful for the chance to be in a new place and out of my element, and to be there among people I love like crazy.

This was that precious moment for me, and I suspect it was the same for my dad and daughter. Though it lacked bagpipes, was not decorated in argyle, and didn’t involve any haggis, this memory is one of my favorites from Scotland.

Come to think of it, this is one of my favorite memories, period.