Going the Distance at Western Seminary 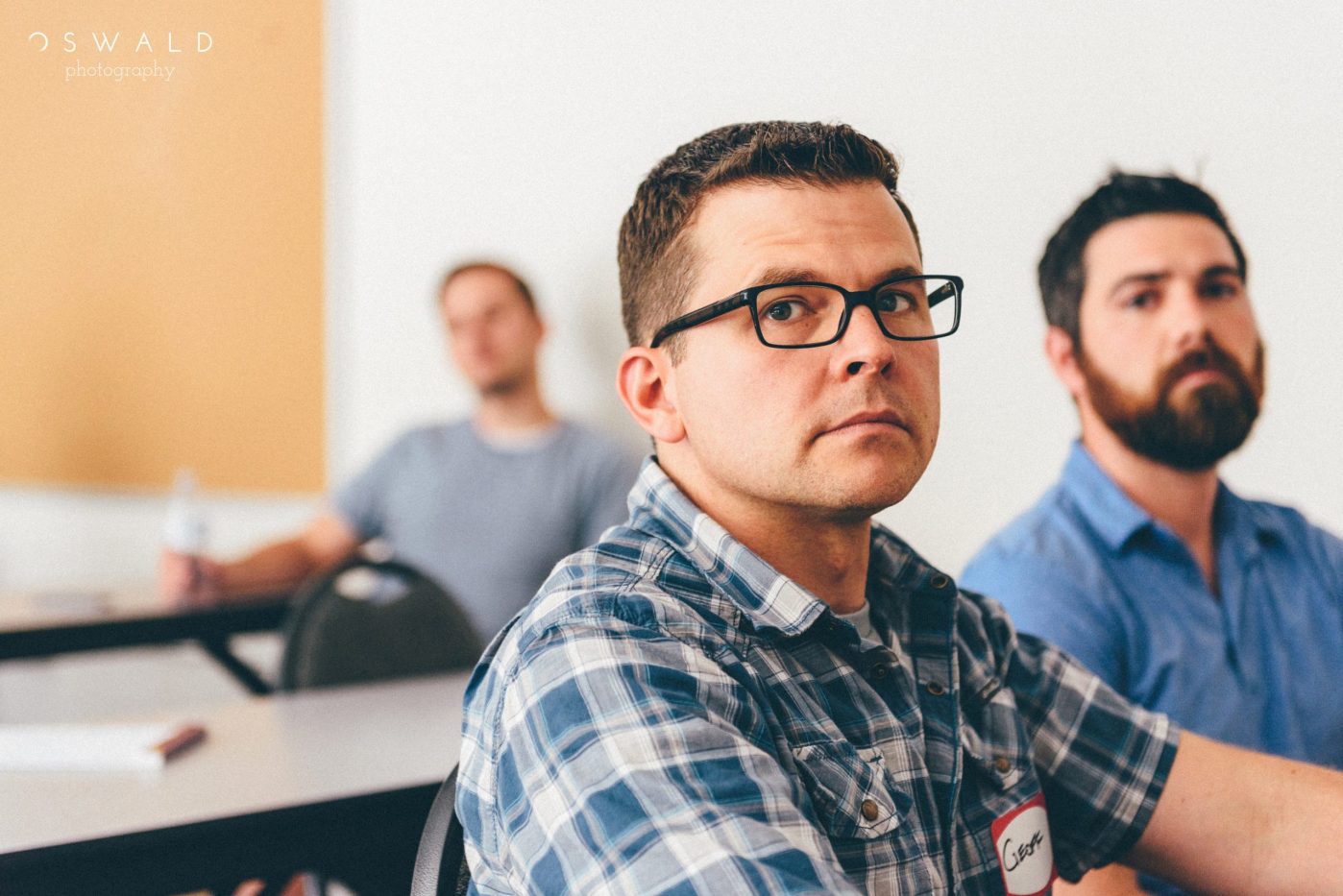 Marketing masterminds will tell you that you’ve gotta have eyes and teeth. What they mean is that your organization needs to feature photos of people with their eyes shining, and their teeth showing. Smiling is preferable. That magic combo sells stuff, and lots of it.

I captured plenty of photos with eyes and teeth that day, but I find myself particularly drawn to this image. So why am I taken by this “toothless” photo, anyway?

I drove a charmless rental car through a string of Portland neighborhoods both quirky and charming. My route took me past strip clubs, past the Bipartisan Cafe, and around the foot of Mt. Tabor. Finally I made my way through a neighborhood where I suspect that I may have lowered the resale value of a few beautiful homes just by being there. And then I arrived at Western Seminary Portland Campus — ready for my next commercial photography shoot.

After parking under trees that were still green (there’s no drought in Portland evidently) I headed toward the classrooms at Bueerman hall and unloaded my photo gear. My task for the day was to capture the comings and goings of a group of Western Seminary Online Campus students who had traveled to Portland for a special set of intensive courses. We’re talking five days straight, eight hours a day spent in classes. They had spent the last 2.5 days in the class “Learning to Love God and Others”, and now they were in the thick of “Discovering and Developing Your Ministry”.

You would think that these folks would be spent — and you’d be wrong. I snapped photos from far corners of the class, over the shoulders of students, and sometimes right in their (gracious) faces. As I did, I saw laughter, furrowed brows, and minds racing with genuine questions. I saw people grappling with tough questions that threatened to change the way they had always understood things to be. The professor, Dr. Marrs, suggested to this room full of pastors and Christian ministry leaders that perhaps God doesn’t give a special calling to vocational ministry, but gives just as much guidance to work in less churchy contexts. Some nodded, some shook their heads. Others shot their hands up with opinions that were about to spill out of their mouths whether called upon or not.

On class breaks, I got to know some of these folks and just how much they were invested in their theological education. I met folks who lived right there in the Portland area, as well as some from Montana, Massachusetts, Illinois, and Florida. Not to mention a couple of gents from Germany, one from Wales, one from South Korea and another from Japan. These were kind-hearted folks wearing sandals, t-shirts and blouses. Normal people who had been changed by Jesus, and who had taken plenty of knocks in their ministry work. But out of love for God and others, they were looking for training to keep them growing.

I chose to share this photo with you because of the expressions. Eyes? Check. Teeth? The opposite of check. This photo surely didn’t capture smiles, and that’s okay. I think people are smart enough to realize that the toothbrush users/car drivers/cereal eaters/Chia Pet owners in TV ads couldn’t possibly smile as much as the screen suggests. We understand that life is not quite so easy or whimsical. For that reason, I was trying to avoid only shooting the smiles at Western Seminary that day and capture life as it came.

As you can see, the guys in this photo weren’t posing for me. Rather, they were tuned in to their training, studying the Bible as a source of truth and life, and intent on squeezing the greatest value out of their time in class. Heck, many had come thousands of miles to savor these moments and you could see that on their faces.

By the time I left campus I had shot about 1200 photos. As I looked back over them on my plane ride home, I was downright pleased with how much I had grown in my photography skills since my last commercial shoot. Even more than that, I found myself proud to work for a school who trains students like these. That was a satisfying cocktail of emotion to enjoy as I flew back home to Sacramento.

Here’s hoping that my latest photography work conveys the sense of drive and faithfulness these Western Seminary students bring to the table.

Who do you think of when you think “committed”? Tell us in the comments below.