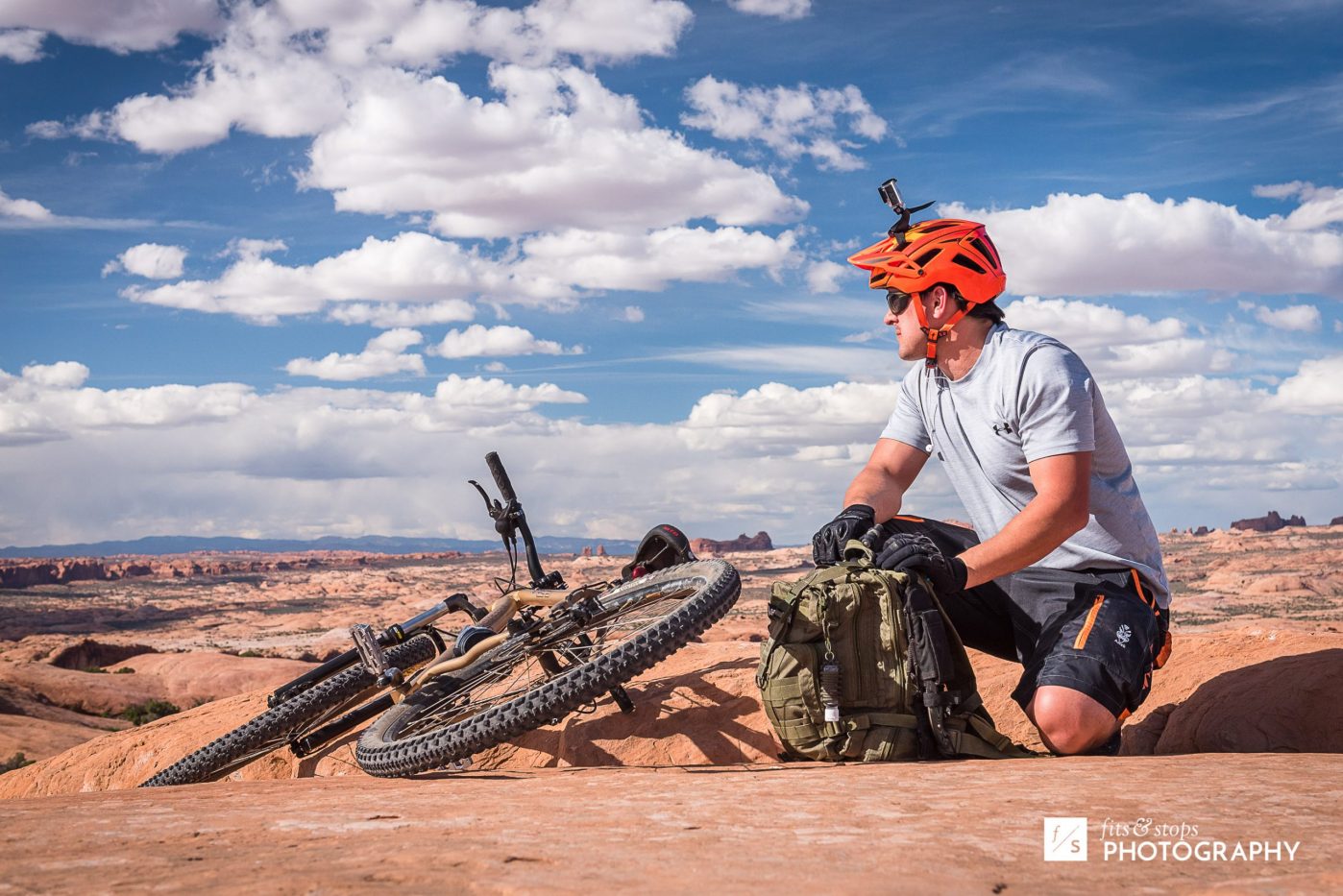 My body had no business waking up at 6:00am that morning. Not when my kids (who rise with the sun) were two states away. Not after a through-the-night road trip, a time zone change, and a rough ride at Navajo Rocks the day before. Yet, there I was in a hotel room in Moab, Utah: exhausted, and wide awake.

Had I known what was in store for that day, I might have pulled the covers over my head one more time.

When I could rest no longer, I threw on some clothes and my camera bag and left my three roommates sleeping in the off-chance I might catch a sunrise over the red rocks of Moab. It would mean scaling a nearby hill, but that was a price I was willing to pay…had I the means to pay it. Not only were my legs tired from yesterday’s ride, but my lungs continued wrestle with the unfamiliar reality of life at 4000 feet. With more effort than I’d imagined, I reached the empty decks of Moab’s Sunset Grill where I had free reign to take some landscape photos of the surrounding area. At least until it was breakfast time…

What comes up must eventually go down, so I marched back down the hill for some breakfast with Ben, Nate and Phillip. Over styrofoam cups of raisin bran and undercooked waffles, we made big plans—overly big perhaps. We planned to find a good morning ride, come back to the hotel to stock up on water and food, and head out for the (in)famous Slickrock Trail in the afternoon. So what trail could we bike that morning that would tenderize us without turning our legs to Jello? Our answer was the Intrepid Trail system at Dead Horse Point State Park, marked on the internet with a green circle instead of a black diamond.

Never before have I done so little work to reach such incredible views of the world. Here are a few of the more memorable moments and vistas from our time on the Big Chief trail there at Dead Horse Point.

Thankfully, our ride at Dead Horse Point didn’t take too much climbing, and didn’t involve any over-the-cliff rescue operations. Though we had ridden the just a few miles away the day before, the landscape here was deeper, wider and redder. Come to think of it, this was one of those few rides I’ve taken in life that ended about when we planned, leaving us plenty of time to explore the breathtaking views of the unending canyons and mesas nearby. Just laying my eyes on it gave me energy, soaking up the grandeur of this alien countryside that God had etched into the surface of Utah long before.

And I would need all the energy I could get.

Two hours and two liters of water later we arrived at the Slickrock Trail parking lot on the east end of Moab. The towering red mesas had given way to sandstone slopes that looked positively tame in comparison. So why did the folks finishing up the look so very winded? We wondered nervously why this trail was marked with a black diamond, or at least I did. It was only about 10 miles long and we had daylight to burn, so we figured we’d be fine even if we had to take it slow.

And take it slow we did. Despite the fact that there was just as much downhill as there was climbing (this was a loop trail), all I could feel was the climbing. This wasn’t just brief bits of climbing, but long stretches that snaked along the slick surfaces of rock, threatening to throw us over the ledge if we didn’t keep up our speed. I had never ridden anything like this, much less seen terrain like this. We stopped often to catch our breath, or in my case, to down some quick sugar during a dizzying hypoglycemic episode. Or to adjust some sticking breaks. Whenever we stopped, I checked my phone’s tracking app to see just how far we had (or hadn’t) come. This was some slow going and the sun was sinking. Though the prospect of making our way along the trail at night was unsettling, it was also good motivation to keep going.

As we raced with sore legs and egos toward the end of the trail, we met a fellow (let’s call him Lenny) whose bike was turned upside down along the trail. That’s usually code for “something’s wrong with my bike”. In his case, a broken chain had brought him to a screeching halt and meant he’d likely be walking his bike home. Fortunately for him, Phillip is always prepared, and had a chain-breaking tool at the read for just such an occasion. He and Ben futzed with the chain for a while while Lenny and I talked small. Our conversation left a major impression on me.  Here’s why:

As the fellows fixed up his bike, Lenny kept thanking us. Over and over again. He offered us discounts at the sporting good shop where he worked. He offered to let us borrow sleeping bags if we wanted to sleep under the stars. He offered to take us out for beers. He offered us a place to stay. He was clearly filled with gratitude at having some folks help him out of a bind, and must have reckoned that he needed to make it up to us…to make us even somehow. As the chain became whole again, we said our goodbyes and headed on our way.

As we did, someone remarked at just how difficult it was for Lenny to receive a bit of grace. It reminded me of how often I to accept the grace of God, as if I’d rather earn it than be given it for free. I squirm at the thought of being dependent upon someone else. I chafe at the thought of not bringing equal value to an exchange. It can be humiliating to be on the receiving end of kindness. And yet that is the strange and wonderful thing about the sort of grace that God gives. “Freely you have received, freely give,” Jesus taught his followers.

The four of us finally reached the end of the trail just as the sun was setting. It had taken four hours to travel just 10 miles. Arduous miles, admittedly. We sighed with relief and a profound sense of accomplishment. We had completed one of the most famous mountain bike trails in the world rather than turning back in defeat part way through. Each one of us despaired at different points along the way, and we took turns being the one to egg us on. Now we were done. We made plans on the spot to rack up our bikes and get to the closest burger spot we could find, provided there were milkshakes on the menu. We had burned our fair share of calories that day and it was time to refuel.

But before we could leave, Lenny caught up with us. He told us to wait a minute as he went to his car and got something. He returned in just a minute, handing us a Costco-sized tub of mixed nuts as a token of his gratitude. We smiled as we shook hands in farewell, then sped away from Slickrock toward milkshakes and a lazy evening.

Ever ridden Slickrock Trail for yourself? Share your war story in the comments below!