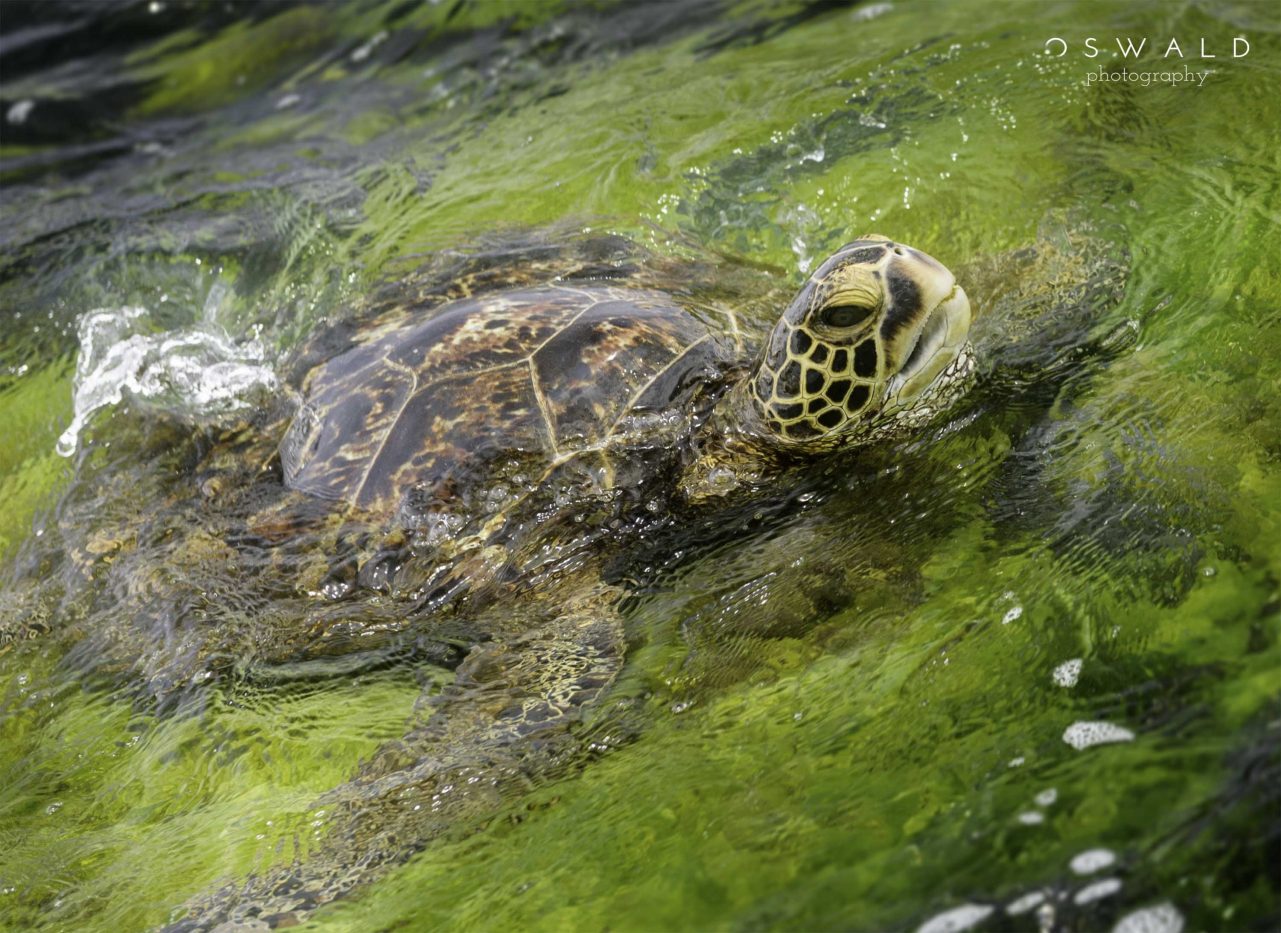 I’ve never really thought of turtles as being bloodthirsty. Not until one viciously attacked my son at Kiholo Bay.

Well, maybe “attacked” isn’t the right word. And “viciously” is probably an overstatement. But not as far as my son was concerned!

My father-in-law’s Hawaii guidebook had been our vacation Bible during this family trip on Hawaii’s Big Island. It boasted candid reviews of various points of interest around the island, from beaches, to vendors, to restaurants. The authors had written with a masonic, swaggering tone that made it clear that, “Ain’t nobody knows this island like us!” I, on the other hand, knew nothing about the island so I was ready to take their word for just about anything.

One of the “gems” that the book highlights is the turtle’s paradise of Kiholo Bay, just north of Kailua-Kona. Tucked away within a corner of this bay is a calm and protected little inlet that offers shelter to one of the largest populations of Green Sea Turtles on the island. My kids couldn’t wait to see a real sea turtle up close, and if I’m honest, I was pretty excited too. All that stood between us and more turtles than we could handle was a bumpy off-road drive and a “short walk”.

We managed to make the bumpy drive down to the trail in our rented Chrysler minivan with only one major scrape. Nobody was too upset by that though. We figured we’d see turtles within five minutes’ walk.

Well, the guidebook authors must have a stride of about fifty feet per step. Or they didn’t have little kids. Maybe both. After about 30 minutes of walking, we had only come about a third of the way to the turtle lagoon. Our youngest son is only a year and a half old, which meant that his pace was anything but steady or sure-footed along that black sand beach. The other two kids were having a bit of a hard time staying motivated too since the promise of Green Sea Turtles seemed to be much farther away than they had planned. And poor grandpa — he was fighting a stomach bug as he followed along, though he kept a stiff upper lip the whole time.

And then something wonderful happened. The shells of many Green Sea Turtles began to surface along the waters of the beach, well before we reached our destination. The kids ran in delight to the edge of tide pools to get a closer view. Meanwhile, I held my camera glued to my eye in hopes of seeing the turtles pop their heads above the water. Suddenly, we had our payoff.

I hadn’t brought my telephoto lens, and so I knew I’d have to get close if I wanted a good shot of any of these beautiful creatures. I walked a few feet into the waves near where some turtles were floating over some algae covered rocks. I did my best to protect the camera from the salty waves while snapping feverishly to catch a glance of a turtle, rather than his rear end. Ultimately, I got the shot you see here.

All the while, my little guy William (2.5  years old) followed me through the water smiling ear to ear. That is, until the incident. After a few minutes of following turtles, a rogue wave threw one of the turtles directly on a collision course with him, so that the turtle’s shell grazed William’s shin. There was no cut, no blood, and no missing limbs from either of the two parties. It didn’t matter; my little guy screamed bloody murder and ran back on to the beach into the arms of my wife.

It took a bit for William’s tears to stop flowing (and for our veiled laughter to die down). We reassured him that he’d be okay, and that no, the turtle wasn’t really bad or mean. A quick snack calmed him down a bit too. But between the “turtle attack”, the distance of the lagoon, and grandpa’s groaning gut, we figured it was probably best that we head back to the van.

Even if our walk had been anything but short, the expedition had been a blast.

I wonder if William would say the same…

Ever had an encounter with a Green Sea Turtle? Tell us about the exchange in the comments section!