How to Change the Oil (With the Kids) 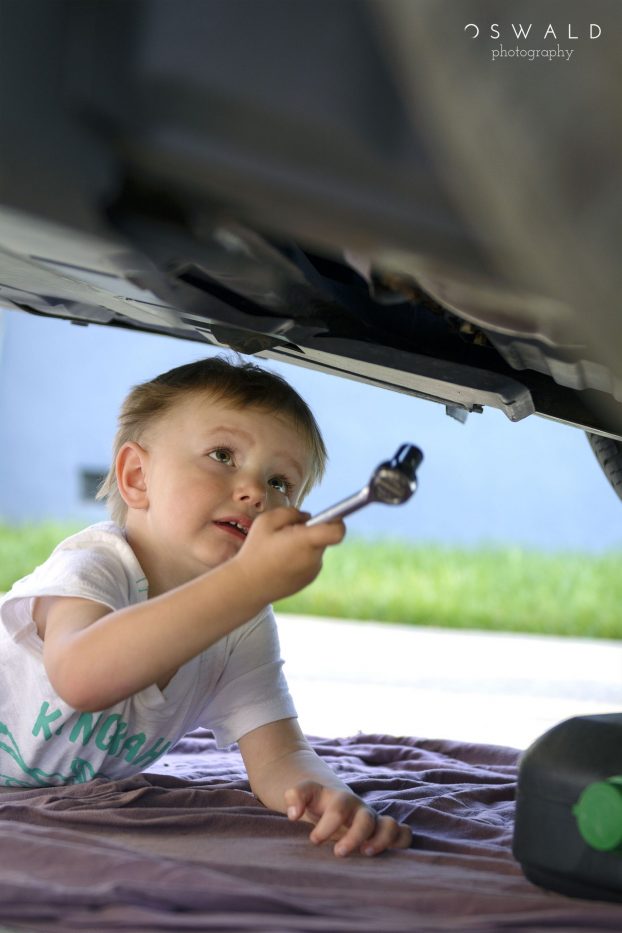 Here’s my theory; Whenever we can’t really figure out who first coined a saying, we claim it was an African proverb. Case in point:

Whoever it was that actually said it, they’re right on the money.

I don’t make any claims that I am mechanically inclined. And yet because I’m frugal, I choose to change the oil in my car myself. I just can’t bring myself to part with the sort of money it costs to take the Nissan to Jiffy Lube for a drink of synthetic oil. Not when I can save about fifty dollars with a little DIY.

So when my faithful Nissan beeps to tell me that it is again time to change the oil, the ritual begins again:

At least, that was the ritual before my kids entered the picture.

My son and daughter love nothing more than being included. They long to take part in the most mundane things in life, as long as they get to be around mom or dad. When they see me setting car ramps out in the driveway, they know that something cool is about to happen and they run out of the house to join in on the fun. After all, there are colorful jugs, and funnels, and socket wrenches and loads of paper towels sitting out in a place that is normally characterized by one boring word: concrete.

When I was newer to this “dad” thing, I used to cringe when my kids would come out of the house to “help” me change the oil. They would get into the tool box and take out the sort of sharp, pinching, and slicing tools that could spell a trip to the ER if they used them on themselves. Dirty oil would find its way onto their clothes. The car horn would honk, as if by magic, while I was as close as humanly possible to the horn. I was spending as much time protecting, disciplining, and chastising the kids as I was changing the oil. What was meant to be a 30 minute process easily became an hour-long process. It was almost enough to make me want to just drop off the car at Jiffy Lube for that expensive oil change!

But last year, I came to a realization. My kids had no desire to make life harder by helping me change the oil. They truly wanted to be with me — to explore something unusual and greasy with me. I reflected on memories of “helping” my own mom and dad in the same ways when I was a little guy, likely to their own chagrin. I also imagined a future in which my kids were old enough that they no longer cared to work with me on my projects, opting for friends, homework, and lives of their own. I could tell that my lack of patience was short-changing my kids, and failing to show them the sort of love and direction that God intends for my kids to get from me. So I changed my approach.

Instead of budgeting 30 minutes to change the oil, I decided to give myself an hour and a half. This way, I might welcome my kids into the process rather than resent their part in it. They loved it, and so did I.

My daughter wedged the bricks behind the back wheels to keep the car from rolling while we toiled underneath. I taught my son what the tools were, and he handed them to me as I laid beneath the car. Both kids helped to throw away paper towels covered with oil that I nearly spilled. And they held the funnel as we dumped the yucky, old oil into a disposal carton. I invited each of them to crawl under the car to see the world beneath, and they had so much fun that I grabbed the camera to snap some photos of them exploring the undercarriage. Here you can see my little guy holding up the socket wrench to any bolts he could find, to see if he could find a good fit.

Perhaps the strangest thing of all was that we didn’t spill a drop of oil that day. We weren’t rushing — just savoring our time together. We went far that day, rather than fast, and I can safely say that I hope to “go far” more often with these little ones.

When have you experienced the truth of the alleged African proverb above? Share with us in the comments below!