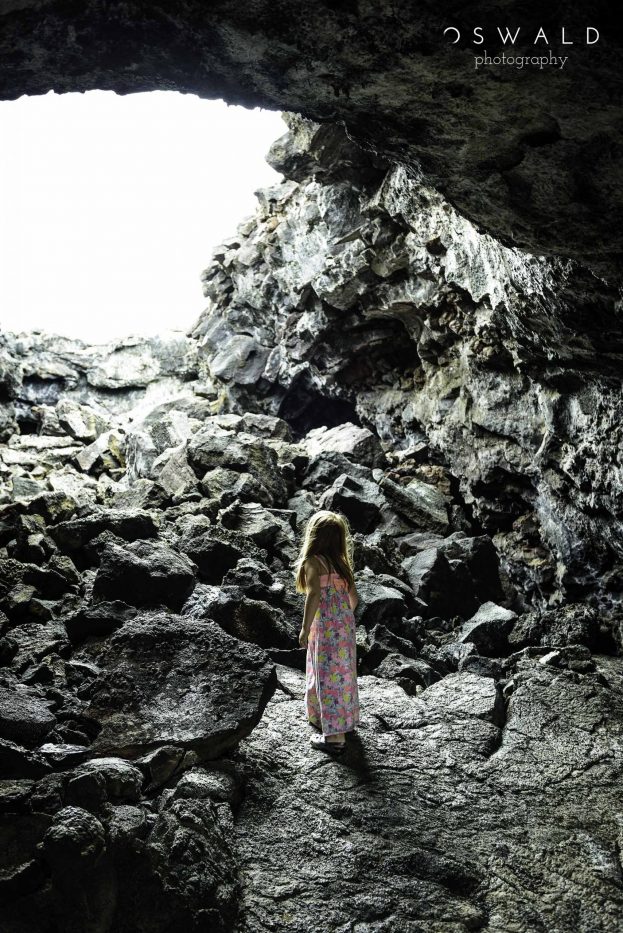 Sometimes I get the feeling that my daughter is more courageous than me.

All this time I thought that I was supposed to be modeling boldness and drive for my little girl. Yet she’s the one who coaxed me further into the lava tube near mile marker 91.

This was to be a trip filled with adventures. When it takes two hours to drive to the airport, a couple more hours waiting at the terminal, and then five more in the air, you’d better believe that we were filling our kids’ heads with the promise of adventure at every turn. Otherwise, there might have been mutiny. There had to be some reason that we were taking them far from home to the Big Island of Hawaii.

It turned out that our three kids were eager to embrace island living. It was difficult to pull them away from our condo in the morning because they were exploring the balcony, or watching Odd Squad on TV. And when we explained that it was time to leave the beach, they weren’t ready to leave the tumbling waves and rope swings yet. For each new and enticing place we went, we continued our tradition of promising even greater adventures just around the bend: the swimming pool, the volcano, or the hardest sell … dinner.

So when I heard tell of an extinct lava tube just off Highway 19, I begged to stop our van for few minutes so I could get my photography fix.

“There’s a lava tube that I’d like to take some pictures of.”

“That sounds boring. I want to go to the beach.”

“I’m just going to have a quick adventure, okay?”

So my daughter and I hopped out of the van, ill-prepared for the jagged walk down into this lava tube. She wore her flower print dress with Crocs, and I had my shorts and Sanuks — not exactly hiking garb. I was a bit surprised that mom let me take her along. But there was something arresting about this old tunnel that may have even convinced her that it was worth entering.

Lava tubes like this one form during volcanic eruptions where the lava on the surface cools and petrifies, and the stuff underneath remains, um, melty (thank you for the word, Taco Bell). This kind of phenomenon left behind this particular lava tube that stretched hundreds of yards back into the Hawaiian landscape. It was just begging to be explored.

And so we rambled and climbed and hoisted and wound our way further into the lava tube. Every so often, I looked ahead into the subterranean tunnel, expecting it to become dark enough that we’d have to turn around. And then light would spill down through another skylight in the distance. “Let’s keep going,” Kali would tell me.  I think she sensed that I contemplated turning around and heading back to the van.

And so we kept going. Even after she got a few scrapes and her long dress caught on pointed pumice thorns, she went on unfazed … and more than a few steps ahead of me. I was overcome with pride as I watched my little lady (who loves to paint her nails, sing Frozen songs, and play with baby dolls) forge on into the unknown. I caught a few great photos of her peering into the distance and up into the light, like the one above. I hugged her tight more than a few times. And in the end, it was her that plotted a course up the rocky walls to finally lift ourselves out through a skylight to the surface.

More than you know, Kali.

Where have you found adventure under the Earth’s surface? Tell us in the comments below!