Over the Mighty Columbia River 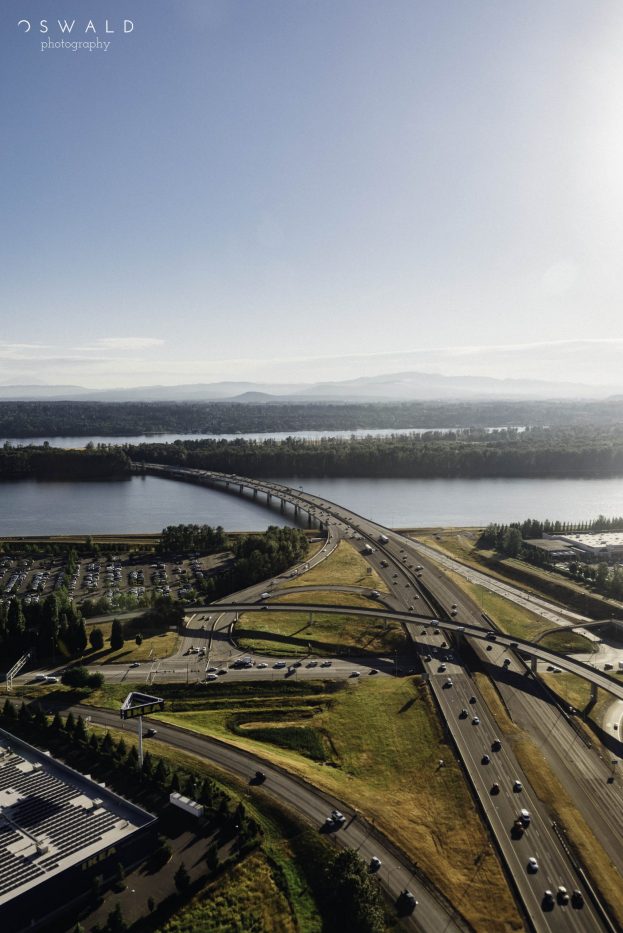 My day started at 3:30am. The early wake up was due to the fact that I had a 6:00am flight to Portland, Oregon to catch.

Though I get the feeling that my nerves would have nudged me into the waking world early even if I didn’t have to hop a plane that day. You see, I was excited anxious to delve back into the world of commercial photography during an all-day shoot at Western Seminary Portland Campus.

My body was moving. Now my mind just needed to wake up as well.

I made it to the Southwest Airlines terminal in good time, with breakfast Stromboli in my hand and camera bag upon my back. There were at least ten minutes to eat before loading up on the plane. I figured I’d get the eating out of the way, so I could get some much-needed sleep as soon as I found my seat on the plane. I knew the cost of sleep would be steep: missing out on complimentary peanuts and half a serving of cranberry juice.

But by the time I took my seat in row 39, I lost all willpower to sleep.

A year before, I had set a goal of graduating to a full-format (or full frame) camera before my next commercial photography gig. I figured my future clients would appreciate the better low-light performance, higher dynamic range, and more all-around awesomeness. Well, they wouldn’t care about any of those things, but they would like getting better photos from a better tool. My tool of choice? The Nikon D750, which I had purchased just a few weeks before. I was eager to put it through its paces.

Back to my sleeplessness at row 39. As I took my seat, the stewardess announced that all passengers had boarded the plane — and I could see that the plane was only about a quarter full. To a typical passenger, this simply meant she could have a row of seats to herself. To me, however, this meant that I could roam freely around the cabin, snapping shots on a new camera from any number of vantage points or porthole windows while the rising sun cast long shadows over the landscape. Come on, did you really expect me to sleep through that?

The flight crew and other passengers must have had a laugh to see me at play. I shifted seats constantly, looking for angles that were free of distraction and wrestling with the challenge of low cabin lights. I took far too many photos of the surface of my cranberry juice (yep, I managed to gulp down my beverage of choice). I pushed my poor lens right up against at least ten different windows in hope of capturing aerial photos of the landmarks below: the Sierra Nevada Mountain Range, the Pacific Ocean, Shasta Lake, Castle Crags and the green-carpeted forest and farmland near Portland itself.

I found my last of many seats when the captain announced that we had begun our descent into Portland. The “fasten seat belt” light came on, and I resigned to being stuck in place for my final few minutes. That didn’t stop me from taking a final few photos. As I did, I found that I captured some of my best aerial shots the closer that our plane came to the ground.

My favorite of the bunch is this shot of the Mighty Columbia River. This tremendous river draws the dividing line between the states of Washington and Oregon before it empties out into the Pacific Ocean. The Columbia River is the largest in the Pacific Northwest and the fourth largest in the United States, just begging for more exploration next time I can get some free time during my visits to Portland. While there are many more scenic spots along the river (like the nearby Columbia River Gorge, for instance), I chose this one because it shows the intersection of people and place. Specifically, there are three forces of nature at play here: the Columbia River, tireless Human traffic, and of course those Swedish masters of the meatball, IKEA.

I didn’t mind the dark circles under my eyes. I couldn’t remember the last time a flight went by so fast.

When it comes to flying, do you aim for window seats or those along the aisle? Tell us in the comments section.