Seats Before the Wedding Ceremony 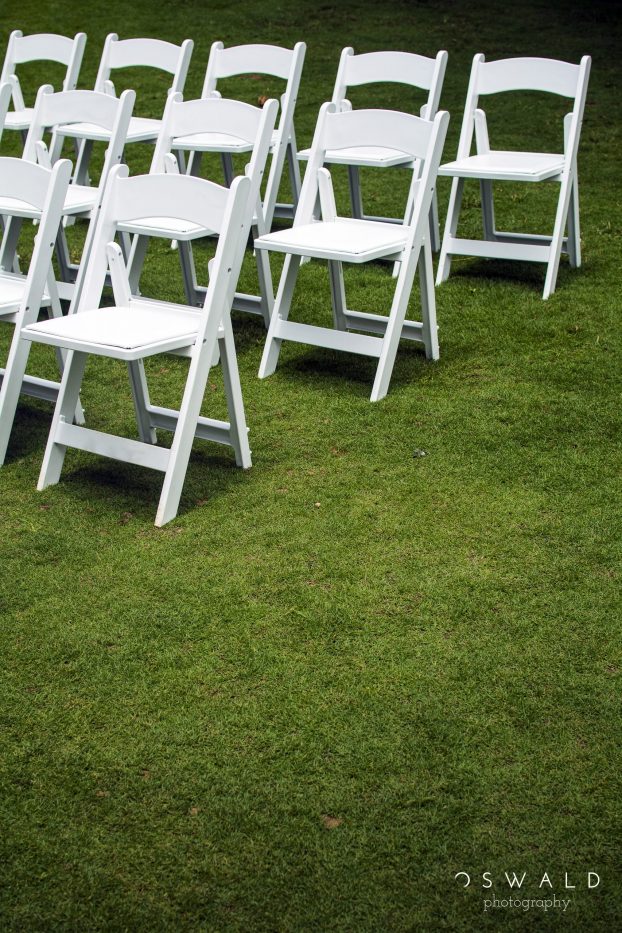 These folding chairs are the sort that you see when you show up for a wedding ceremony. But on this particular day, I was most certainly not on the guest list.

That’s probably for the best, since I wasn’t dressed to play the part of the wedding guest. I was dressed in ratty old sandals, some cargo shorts, and a t-shirt. I hadn’t shaved for at least four days. I looked more like a pale version of the local teenagers working at all the tourist shops. After all, I was busy (or the opposite of busy) enjoying a vacation on the island of Kauai.

My family had walked down to the St. Regis Princeville Resort that day to enjoy the public beach access. After a few minutes of lounging on the beach and gawking at the size and swank of the resort, I grabbed the camera and set off to explore the lesser-known reaches of the seashore. Just as with the rest of the island, this was a patch of giant garden, only a bit more manicured.

After a few hundred feet, I stumbled across a cluster of these white folding chairs — without a soul in sight. There were probably a hundred of them there, all well-ordered to face a decorative arch and altar. Presumably, I had missed the wedding ceremony. Or it hadn’t yet begun, and the chairs were still waiting for their occupants to arrive. The grass was below was masterfully trimmed and the trees above framed the entire scene beautifully. It was lovely…and strangely lonely. So I took a picture.

Why lonely? This scene struck me with a realization about weddings, and the marriages they inaugurate.

The chairs in this photograph were set out because the couple had presumably welcomed friends and family to attend the wedding ceremony. They wanted their marriage to begin in the company of loved ones who would share in the joy of their wedding day. I commend them for that, as these same loved ones will give gifts that same day to help the happy couple start a new life together. Years later, they might offer babysitting to new parents who are in desperate need of a date-night. Later still, they might remind a straying spouse of the vows she made in front of God and Hanalei Bay.

If it “takes a village to raise a child”, it most certainly takes a community to prop up a marriage. My marriage has endured for over a decade thanks first to God, and second to my wife. But we’re also indebted to the people who’ve cheered us on through good times and bad. I can’t imagine where we would be without the help of those who filled the seats at our own wedding ceremony.

So whoever you are, Hanalei Bay couple married on June 15, 2014, I hope that every last one of your seats was filled by the people who will strengthen the ties that bind. Seats like these are not meant to be left empty.

When have you relied upon a community to keep your own relationship going? Give some kudos in the comments below.