Spider On The Night Shift 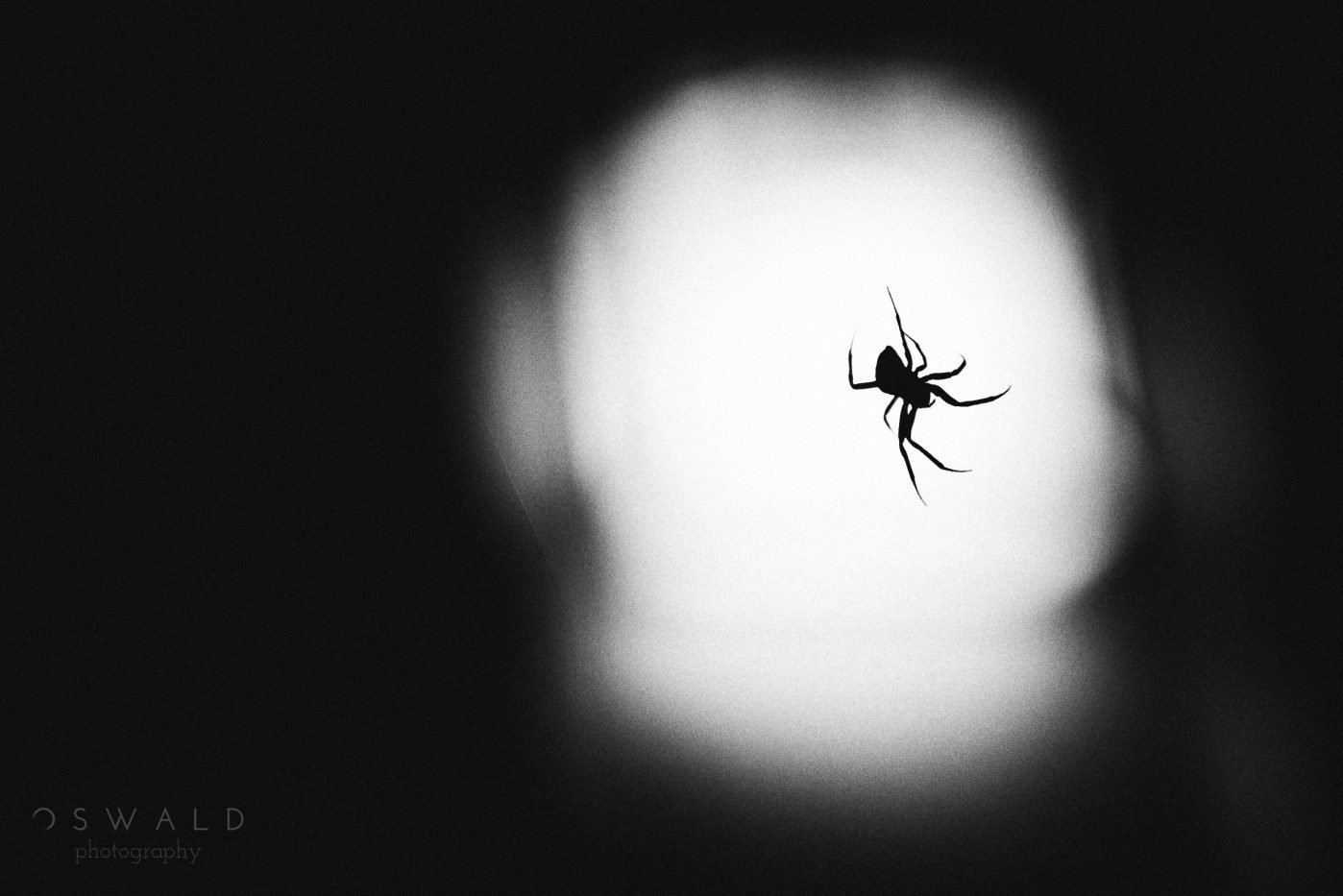 Spiders get no love at my house. Not normally.

If my wife wakes up screaming in the middle of the night you can bet that the gigantic spider haunting her dreams is the one to blame. Things aren’t much better in the daylight. When an actual spider ventures into our house she is likely to be accused of being a Black Widow regardless of what color she is — like some sort of arachnid profiling. But who am I to argue when my little girl is screaming in fear of a spider a few feet above her head? I’m the one my family calls to dispatch spiders, you know, because I’m the tallest.

One evening not so long ago, I encountered a spider when nobody was around to scream …

While making the thirty foot journey from our backdoor to our shed, I nearly walked through a spider web. I’m not that frightened of spiders, but who doesn’t get a bit freaked out a bit when they feel the silk of a web sticking to their face? I spun around in panic until I could tell whether or not the spider from The Hobbit was descending upon me. It turns out that A) there was a spider, B) it wasn’t massive, and C) it was paying no attention to me. It was busy with something else.

This little spider was spinning a beautiful web in the most unfortunate of places. She must have begun her work an hour or two earlier, starting with a circular core from which she built the web outward with incredible speed. I set down the load I was carrying and stood in place — in awe. I watched this patient little creature with a seemingly endless supply of web in her abdomen for over five minutes before I decided I’d better grab my camera. The web was doomed after all. She had built it across the busiest walkway in our backyard. My kids would crash through this thing like a marathon finish line by the next morning.

In two shakes of a leg, I was back outside with a chair to stand on for some close up shots of the spider lady. I kept shooting and shooting in the low light, struggling to catch a good image of the spider since she never stopped moving. She ran gracefully up and down her web with a weaving pattern etched in her spider brain, like some sort of living loom.

It occurred to me then that our exchange student from France was probably a bit weirded out that I was photographing in the direction of her window late at night. And I didn’t expect I’d have much luck explaining to her what I was doing with my three words of French (“milk”, “good day”, “cheese”). I changed my shooting angle so that her window was not in my line of sight. Then I wondered what my wife would think if she saw me face to face with this spider. I decided not to tell her about this little shoot. She had no need of any further spider-based nightmares. I kept on shooting.

The longer I sat there trying to get a good shot of the spider, the more amazed I was. The spider was hungry. All this work wrought an ornate and architecturally sound trap to catch a few meals. The spider would not stop her weaving for anything, even for a human being who crashed clumsily through a corner of the web. I couldn’t tell if that single-mindedness of purpose was due to a simple little mind, or if this was instead perseverance, commitment, or desperate hunger. And was web-building an art form she was born with, or was this a learned skill? If she bit me, could I have some of her spider powers?

I still can’t answer any of those questions (though I do have a good guess at the answer to that last question). I do know that this little spider taught me again to marvel at the wonder of God’s creation. Such artistry and drive in such a small package. It was a thing of beauty.

Just don’t tell my wife that I was enamored with a spider. Or that I let it live.

Spiders. Love ’em? Hate ’em? Keep ’em for pets? Tell us your take on the eight-legged creatures in the comments below.