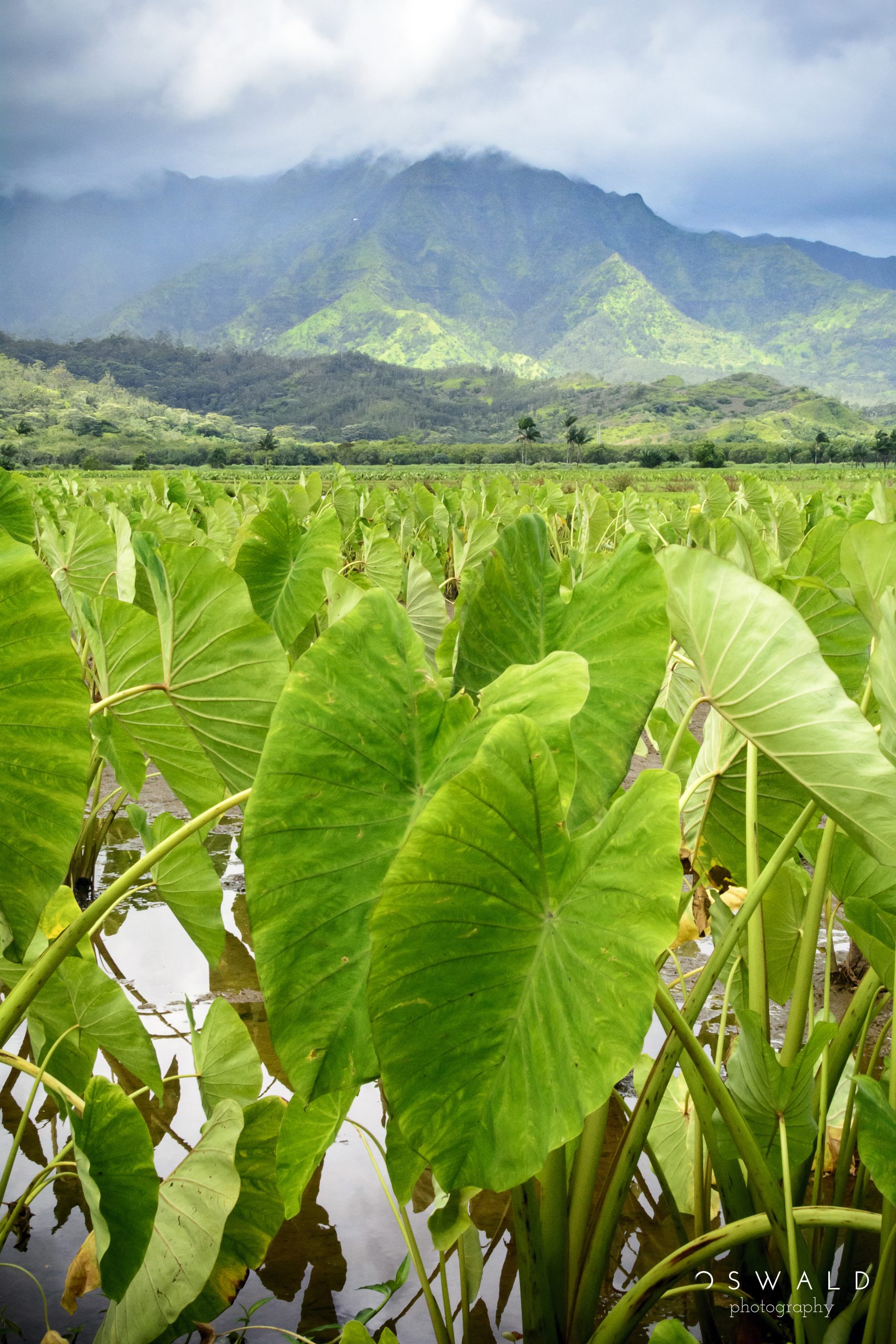 Nobody ever accused me of being suave. And I don’t recall anyone ever calling me a Casanova. So perhaps the taro plant is some sort of aphrodisiac. Otherwise, I don’t have any explanation for why I got a second date.

My family stayed in Princeville during a summer vacation to the island of Kauai, just minutes away from one of the most scenic valleys I’ve seen. The shades of green that carpet the mountains and Lower Hanalei Valley floor are almost enough to steal the title of “Emerald Isle” from Ireland. Much of this green abundance comes from what is one of the largest taro growing areas in the state.

Wait a minute — you don’t know what the taro plant is? You’re not alone.

The taro leaves you see in the photo above are each several feet tall, which has earned them the name of “elephant ears” over the years. While the foliage is monumental, taro is planted in order to harvest the edible stems and roots, called “corms”. The taste of these grayish purple roots is on the sweet side, enough that they remind me of sweet potatoes. And for taro plants to truly thrive, they need to be submersed in cool, moving water. This makes Kauai — one of the wettest spots on Earth — a perfect spot to grow taro.

Yet the place I discovered taro was several thousand miles away, in the small city of Davis, California. While away at college, my roommates introduced me to a variety of new tastes that were commonplace in their own Asian American upbringing. One of those new tastes was Boba Tea or Pearl Tea, courtesy of Tapioca Express. Their menu includes all sorts of hot and cold beverages like teas, juices, and slushies. For the right price, you can add a heap of little tapioca pearls to your cup that become all the more enjoyable thanks to the huge straw you use to suck them up. My favorite drink? Taro milk tea…with tapioca.

So when I had finally worked up the courage to ask the lovely Erica out on a date, I thought I’d invite her to try something new; I took her to Tapioca Express. I wonder what she thought as she walked into the place, seeing the students lounging on the couch with binders open, and a sweaty teenage boy jumping with abandon in front of the Dance Dance Revolution arcade game. It wasn’t the most romantic environment, and it hadn’t even occurred to me to ask her out to some swanky, expensive meal to impress her. But she played along as though this was the most normal thing in the world to do. She ordered a green apple snow bubble…with tapioca.

The rest of the night was glorious. We talked for hours about the things we’d done, the places we lived, the faith we’d grown, the career plans we had made, the cars we had learned to drive in, and the college classes that had kicked our butts. We sat on uncomfortable chairs while we downed our strange and wonderful tapioca drinks. We started into a relationship that would turn into love, and marriage, and even greater love.

And like I said, that taro in my drink must have had some magical effect on Erica; she saw a future with me in spite of our cheap and strange first date. In fact that future together has already outlasted that very Tapioca Express shop.

So years later, back in Kauai, I was driving down the road to Hanalei and stopped to take a closer look at this taro stuff that had been such a memorable part of our first date. Sure it tasted good in milk tea. But as I saw miles of taro plants growing out of flooded paddies, taro gained some extra otherworldly magic. I snapped this photo that day, capturing a bit of this beautiful farmland with the mountain range whose clouds never lift. And I even escaped that photo session without slipping into the deep mud that taro farmers must brave in the harvest.

But for all the beauty of this Hawaiian landscape, this photo of taro conjures memories not of my summer vacation, but of a magical night at a crowded shop in downtown Davis.

What were the tastes and smells of your first date? Come on, tell us about it in the comments below…