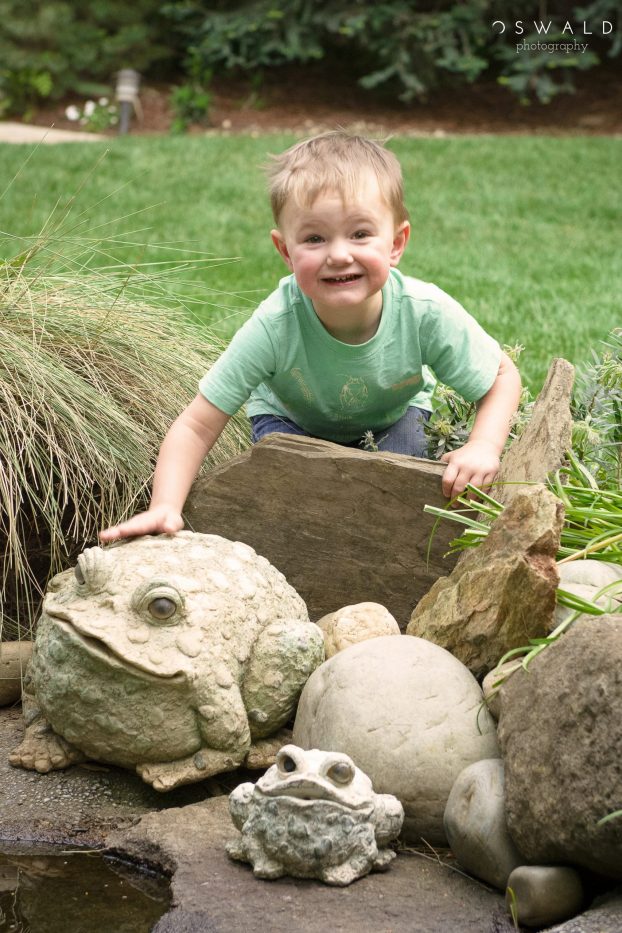 Robert Redford portrayed a man who had a way with horses in his 1998 film, The Horse Whisperer. Cesar Millan later came to fame in his show The Dog Whisperer.

My son? He’s the Toad Whisperer.

My father-in-law’s backyard is a slice of suburban paradise. Not only does he have a green thumb but also a winning way with landscaping and design. He can transform any ordinary yard into a recovery from days filled with commutes and office work. For him, this means building water features and drip systems and tending koi populations; it takes quite a bit of work from he and his wife to make this little slice of Eden such a relaxing place for the rest of us.

We again found ourselves in Papa and Nana’s backyard in Elk Grove for an Easter celebration just a few weeks ago. Following the Easter egg hunt, the adults took their seat around the table and enjoyed a bit of food and conversation while my kids and their cousins led an expedition around the yard. Sometimes “exploring the yard” means falling or intentionally leaping into the pond to play with the koi. Sometimes it means pulling oranges off the tree to throw at each other. Thankfully, today was a bit more sedate with a dry expedition around the waterfall and brush.

My little boy William broke away from the expedition for a few minutes when he noticed a pair of stone toads perched by the edge of the pond. It was though he had discovered a new species of ridiculously still and lethargic toad. Now the toads had been here for months, if not a couple of years, but it was as though this April afternoon was the first time he had noticed them. I watched him as he stroked and petted the biggest toad, and leaned precariously near the water’s edge to whisper something to him.

Knowing my little guy, he was probably inviting the toad to form an alliance in overthrowing his parents’ iron-fisted rule of the family. Or asking if he could go for a ride. But hey, any of that would be better than what I would have expected from him: throwing said toad into the pond for Papa to fish back out.

I couldn’t contain my laughter any longer as William gently encouraged and comforted the lawn ornament. I pulled out the camera and shot a few photos of my little toad whisperer, who happened to notice that the lens was pointed his direction. He shot a smile right back.

Here’s hoping that his garden rendezvous with the toads will teach him to be just as gentle with his brother and sister. Instead of hoping, maybe I should just buy a few stone toads for our own home.

Papa, where did you buy those toads anyway?