Through Muck and Mire to Kauai’s Secret Falls 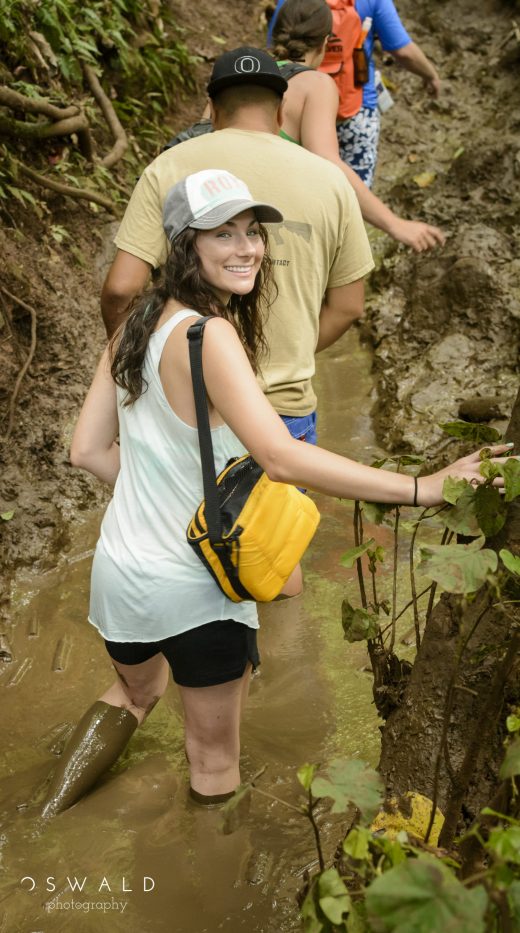 Thai restaurants usually offer several levels of spiciness for their dishes. The first three or four options are not really spicy so as to satisfy those who can’t handle the heat, while making them think they are eating something spicy. But the last option is “Thai spicy” — code for plenty hot.

So when the tour guide told us to bring some grubby shoes for the muddy hike to Kauai’s “Secret Falls”, I figured he was preparing me for wimpy amounts of muck. Nope. This was the “Thai spicy” of mud.

Our family vacation had taken us to the rain forest island of Kauai — one of the wettest and most verdant places on Earth. We spent plenty of time sunning and swimming at beaches and standing in line at the closest shave ice hut. This day, however, was a day for adventure.

We showed up in the morning for a quick orientation at the kayak shop, where we were instructed in how to paddle and how not to run into other boats motoring up and down the Wailua River. We hopped in our watercraft and paddled up the river while listening to our guide’s stories of Hawaiian love for SPAM and proliferation of chickens on the island. This guy was paddling the whole time just like us. Why wasn’t he ever winded?

We soon reached a shallow finger of the river where we had to abandon our kayaks at the shore to hike our way up to the Uluwehi Falls (or Secret Falls). Here is where the mud began. It came in pockets that were avoidable if you wanted to take the time to find a way around…and draw the ire of the rest of the tour group that waited for you up ahead. Then it came in stretches that were unavoidable. Ankle deep, sucking at your shoes while dying them a less-than-lovely brown color. Then we reached the pits you see here.

Shoes were lost. People lost their footing. And I’m so glad I was dumb enough to bring my camera.

My sister-in-law Michele took the trek in stride. Despite the mud, she pressed on when other women (and plenty of men) whined loud and long about the thick sludge. During one bit of particularly slow going early on, I pulled out the camera and snapped this shot of her. I’m proud to have a sister that hangs in there when the mud is knee-deep. You should also keep in mind that the rest of her was nowhere near as clean on the hike back from the waterfall. She kept on smiling though.

I was smiling throughout the whole adventure too. Until I realized that my shoes wouldn’t survive the hike.

What do you think of the photo below? Sound off in the comments section!