View from the Claremont 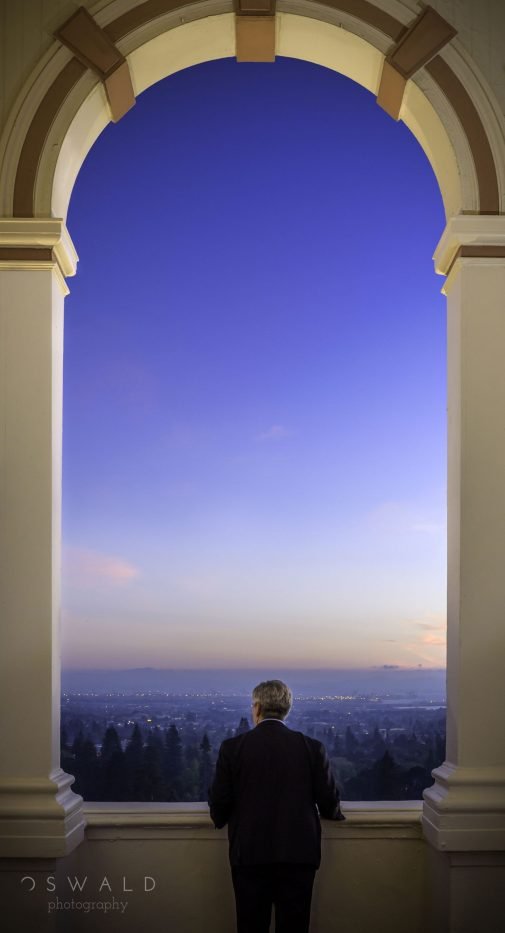 The old phone jumped with a shrill ring.

“Mr. Oswald? Good evening. Our man is ready to take you up to the penthouse, if you’re ready”.

Those are words I had never heard before. So I figured I’d best bring my camera along.

A conference on storytelling had drawn me out to Berkeley, California for a couple of days. My goal was to learn from Pixar Story Supervisor Matthew Luhn about just what it takes to tell stories in ways that moves people. I figured he might have something meaningful to say since the movie Up made me cry in the first three minutes. Specifically, I expected that this conference could enhance my marketing work at Western Seminary, or even in my ministry with our home church — albeit with less tears.

You may have already (correctly) predicted that the first day flew by. Plenty of laughs, plenty of inspiration, and plenty of behind-the-scenes thoughts about the making of these classic movies. Even if I was no better a storyteller, I was even more convinced that Pixar knows what they’re doing. I left the conference room on the campus of UC Berkeley with a full brain.

Rather than spend my overnight stay alone in a hotel, I had invited my family to come and join me for the evening. I knew I wouldn’t get much peace, but the whole family would have plenty of good memories to show for it. Like dinner at the joint where they were out of everything we wanted, so we went with plan B. Or swimming in the largest pool I’ve ever seen, heated to 90 degrees. But the picture that stands out most clearly in my mind is the one you see here.

I had entrusted my wife with the task of finding a hotel a couple of weeks prior. My demands were few: 1) keep it close to my conference hall, and 2) keep it as inexpensive as possible. While I might have settled for a flimsy mattress underneath a highway if I were going it alone, I doubted my family would appreciate my (lack of) taste. Little did I know that one of the closest and most affordable hotels was the Claremont Hotel Club and Spa. Erica had done it again.

I felt as though I was driving up the Swiss alps as I first approached the hillside resort, for it seemed built in a vaguely European style: High pitched roof lines, chalet-style construction, an Olympic-sized pool, and a large tower peering out over the Bay Area. It didn’t quite match the quirky environs of Berkeley. If it didn’t seem to be a product of Berkeley, it certainly wasn’t a product of the 2000s. Signs all over the parking lot and lobby explained that the white-walled Claremont was currently celebrating 100 years with some needed renovations. I was eager to explore indoors.

We set our bags out in our room, and my wife and I lounged on the bed for a bit as our kids leapt with abandon from one bed to the next. As she was thinking through what she wanted to do for dinner, my mind kept returning to that tower. I’d imagined getting up to the top and taking in the view of the San Francisco Bay Area from those heights. But that probably wouldn’t work. Or would it? A sudden “you’ll probably only be here once in your life” kind of courage began to course through my veins.

I snapped out of my daydream and marched down to the Claremont front desk on the bottom floor. I spoke with the manager on duty, Brian, and asked if there is any way for the public to get to the top of the tower. “I’m a photographer”, I explained in a matter-of-fact way. I had brought down my camera with my longest, most intimidating lens and tripod for the sake of offering proof. Brian graciously tapped at his keyboard and told me that the top of the tower actually belonged to whoever had booked the penthouse suite… which on this particular evening was nobody.

“I’ll call you when I can spare a man to take you on up,” said Brian as I contained a squeal of delight silently in my lungs.

The call soon came, and a kindly man named Rick met me at the elevator. Within a few minutes he had unlocked the penthouse doors and walked me through a room where folks made of richer stuff must stay. I mean, the room was equipped with a globe and a telescope! We climbed a flight of stairs up from within that room to the very top of the tower where I peered out from the giant arches into a sunset panorama. It was the most beautiful view I had ever seen of one of the most densely populated regions in the state.

I had to work fast with my camera since Rick was waiting on me to finish my photography before he could leave. He was my unpaid babysitter, I suppose. I took some rushed tripod shots, though the springy old wood of the tower floor bounced and shook my shots to blurriness.  And I took some handheld shots that didn’t quite capture the great view. But when I stepped back to capture a photo of Rick soaking up the view as he waited for me, I knew I had found my money shot of the evening.

I packed up my gear after that shot, satisfied, and Rick and I headed back down to where commoners like me stay. I wonder now if the photo is actually good, or if I just felt good for taking an audacious risk. Whatever the case, I hope I made my new friend from Pixar proud. I descended from that Claremont Hotel tower with a fine photo and a new story to tell.

What are some of the more memorable towers you’ve climbed? And did a man named Rick take you up to the top? Tell us in the comments!