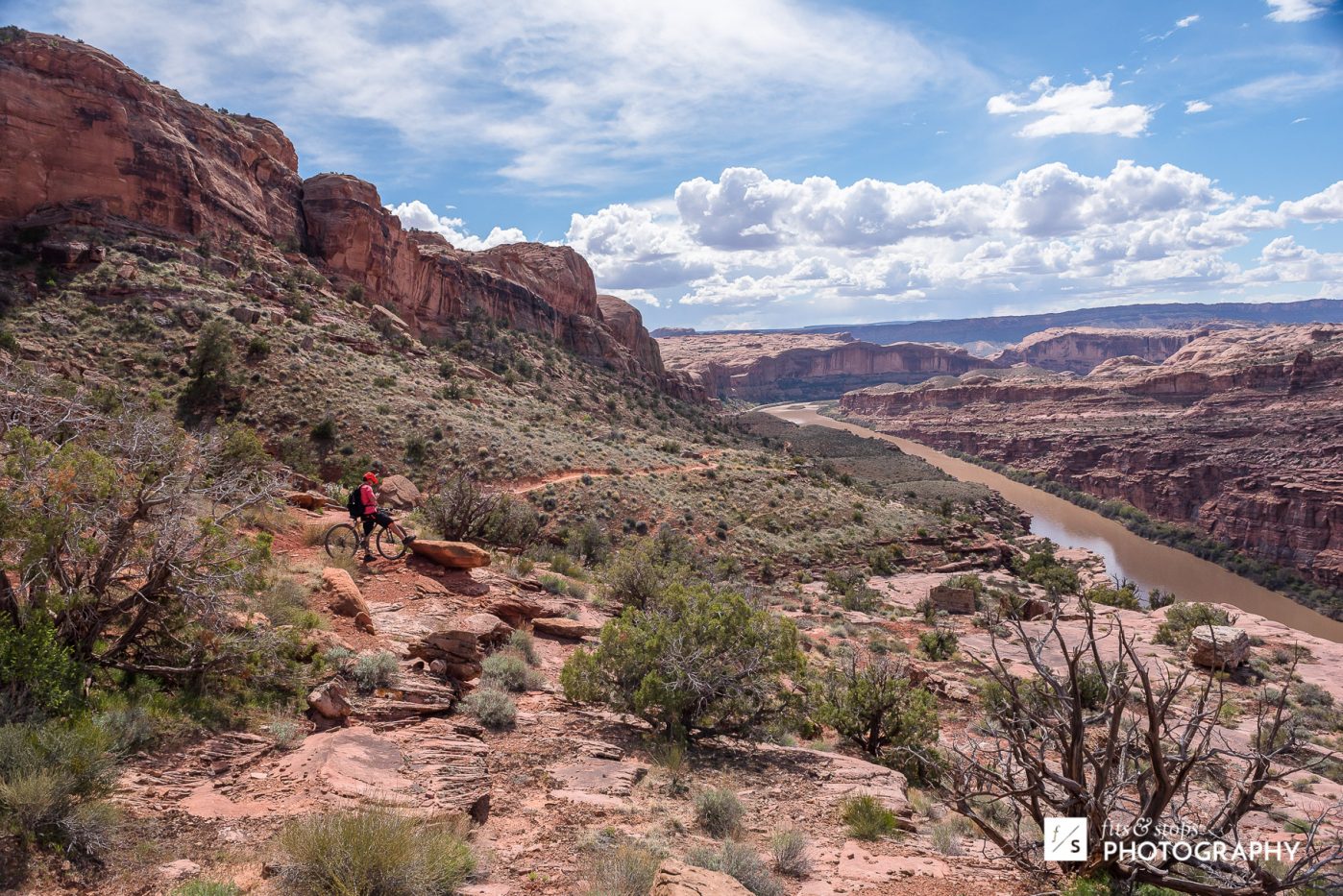 We had come this far, and there was no turning back: The Whole Enchilada Trail.

The previous day’s mountain bike rides across some of Moab’s most treacherous terrain left our muscles aching and longing for a day off. The fact that weeks ago we had reserved a shuttle to take us up for an all-day downhill ride meant that we had barely enough time to catch our breath. That was just the motivation we needed.

We limped out of the hotel and struggled up on to our bikes to meet up with our shuttle driver, Kyle. He threw our bikes on top of his van, and started us on a climb up the heights of Moab. Sure, he told us that he was a professional downhill racer, though he failed to mention that he’s a bit incredible. After an hour of bouncing up a rocky fire road with his wizened answers to our rookie questions about Moab, the trail, and life in general, he let us out at a trailhead that was dotted with snow. He didn’t seem to think we’d die on our ride back down to town, so that was reassuring.

And so began our ride on the Whole Enchilada Trail. Though in all honesty, we rode more of a Partial Enchilada. Ordinarily, one would begin the ride at 11,000 ft in an alpine forest and ride down through a wide variety of climates and biomes until reaching the Colorado River at the bottom of the trail—after a descent of nearly 7500 feet. Since the early April sun had yet to melt the snow on the La Sal mountains, we would begin our ride at a lower elevation where the snow ended. Seeing as we were sore and riding a black diamond-rated trail, we didn’t complain too much about our shortened journey. I was curious to see how we’d hold up.

Here’s how the ride went:

Five hours and nineteen miles later, the four of us crammed back into our single hotel room with aching spines and high spirits. The Whole Enchilada was perhaps one of the bumpiest and most technical trails any of us had ever ridden. I suddenly understood why folks spend the extra money on full-suspension bikes that soak up the jolts for you, instead of letting your back do all the work. I suppose the fact that we rode down on our “hardtail” bikes was a badge of honor for us.

And yet the Whole Enchilada was also one of the most diverse trails I’d ridden. The snow, the heights, the weather and the drops made for one spectacular journey through some stunning countryside. That ride was plain ol’ fun, and my favorite of all the rides we took on our trip to Moab, Utah.

The Whole Enchilada Trail was so fun, perhaps, that we decided there and then to spend our final day in Moab not riding mountain bikes. But I’ll get to that story later.

Have you ever ridden the Whole Enchilada Trail yourself and lived to tell the tale? Tell all in the comments below.