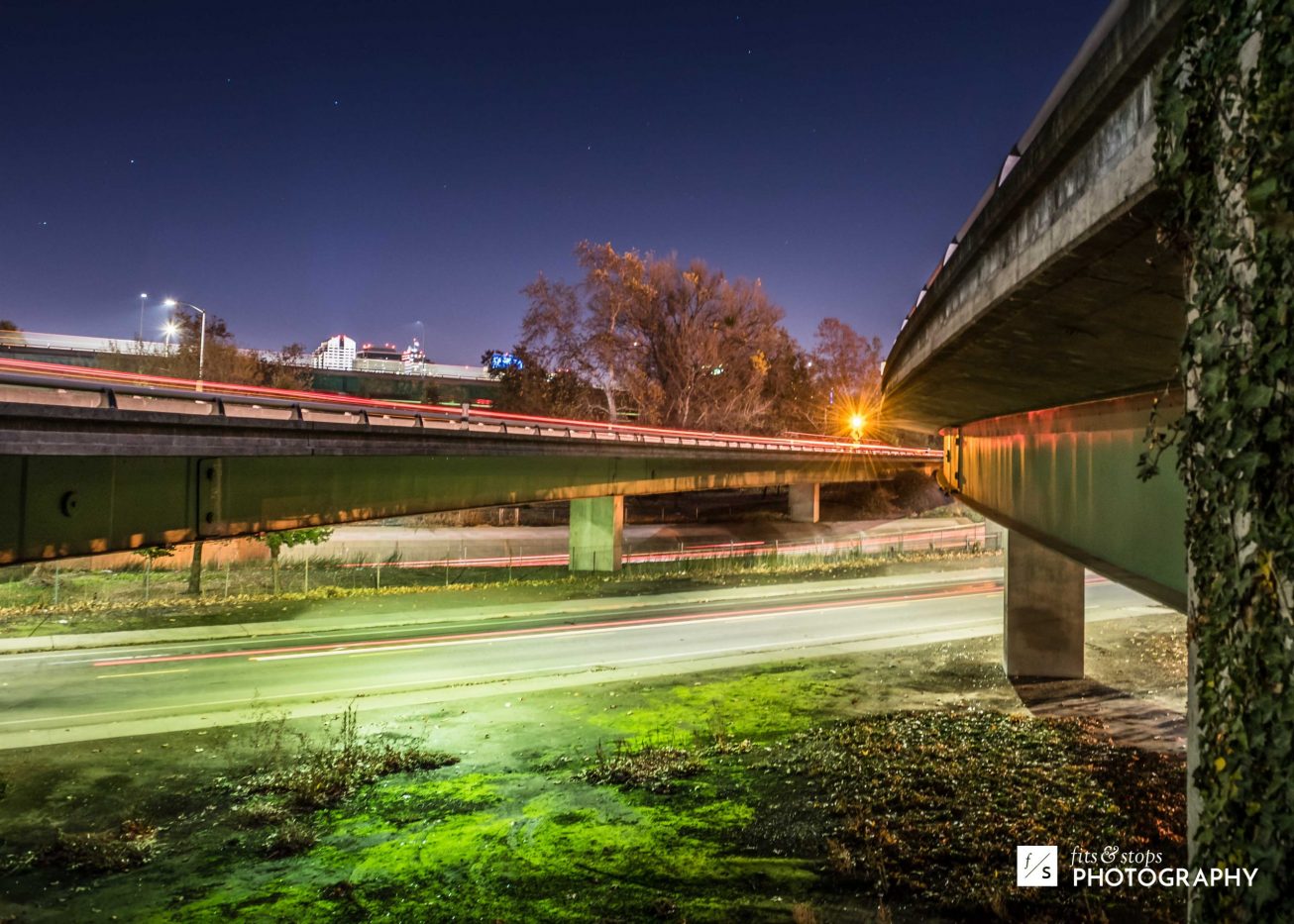 The unthinkable had happened.

It was 8:00 p.m. on the 23rd of December. All three kids were asleep, all presents were wrapped, and the house was clean and ready for guests. I could have puttered around the house with a fool’s errand of further cleaning, but instead, I asked my wife if I could head out for some nighttime photography. I didn’t quite know what response to expect in light of our usual stressful rush to the Christmas Day finish line. She might tell me to scrub the toilet — again. I held my breath.

She said “yes”, with her own sigh of relief. She was secretly hoping to kick back, watch a show and do her nails.

I had a blast on my last nighttime photography excursion in downtown Sacramento, and I was eager for more. I figured the winter chill would no doubt clear the streets that much more, with people heading home to rest up/psych up for the days ahead. This would give me free reign of the city, you see.

Instead, I found that the streets were still packed with folks ogling Christmas lights and finishing their shopping. This was a spectacle in itself, and so I stopped at one spot to snap some photos of the scene in East Sacramento’s “Fabulous Forties”. “Scene” meant traffic cops, children aged one to ninety-two, and a few million tiny light bulbs strewn across homes and streets alike. *Click* My inner introvert soon had his fill and I jumped back in the car, cranked up the heat and made tracks. I would make my way toward my final destination, the place I had been heading, as a Christmas gift to myself.

From the outset, I knew that even if my assumptions of a ghost town were wrong, I could still catch some quiet, urban scenery underneath the city’s elevated highways. I had often dreamed of finding the perfect spot where I could capture the downtown city lights from underneath the towering roadways, beneath the noise. That silence would be my winter nocturne, and my inspiration for the night. I was hoping to find that spot this evening, now that I had nothing to do and nowhere I had to be. Simply glorious.

Keep in mind that I had never once explored this part of town, so I had no clue where I was going. That’s all part of the fun though, isn’t it?

I parked my car near a water treatment center with highways snaking around it, fifty feet above the ground. There were perilously few street lamps, and the few there were shone slightly different colors of light from their mismatched bulbs. I walked along the sidewalk with my camera and tripod, occasionally blocked from these lights by the wide shadows of the roadways above. It was more than a little ominous, and just the sort of vibe I was hoping to explore.

I struggled with the many shots I took at street level. The clutter of litter and neglect was everywhere, and chain link fences stood guard to prevent photographers like me from getting too close to highway traffic in pursuit of that perfect shot. So when I spied slopes raising up from the ground to shoulder the load of these elevated highways, I was eager to see what sort of views I might find up there.

A few false steps on slippery ivy and moist, wintry mud reminded me that the dress shoes I had forgotten to take off after work weren’t the right kicks for this kind of fun. Didn’t matter, I was on my way.

Slowly, surely, I made it up top and a meter away from highway traffic, but still blocked from danger by a fence. And I had found a view worth sharing. I fumbled with my tripod to get it level on uneven ground. When I set the camera down, I was afraid to take my hands off it, knowing that neither of us were very well-balanced, and neither of us would do that well after a slide down the hill. I crouched, shivered, and did my best to hang on with the little tread I had on my shoes. Did I already use the word glorious?

After a few long exposures to light up the dark winter night (like the one here), I took a cursory look at my camera’s tiny screen to see if the pictures were any good. I must have looked for all of two seconds because the cold had started to get to me, and I didn’t know how much longer I could maintain my perch there on the hill. And I figured my wife would kill me if I got killed right before Christmas. It was time to head home whether I had great photos or not. I slid back down the hill with all the grace of a pig on a bobsled — but at least I was intact.

I lugged my gear back into the car and left the parking lot as empty as I had found it. I turned up the radio, and drove upon one of the Sacramento highways I had just photographed. I was cold, tired, and low on gas.

Where have found some great photo ops around downtown Sacramento? Sound off in the comments below!