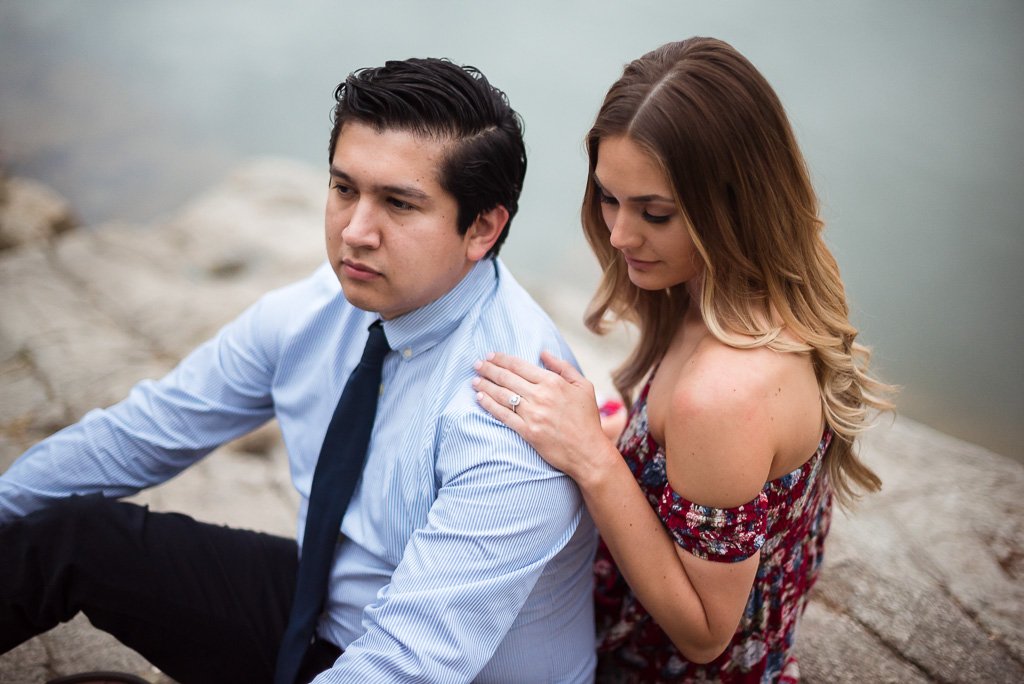 Sure, Ashley and Sebastian first met back in high school. But whether it was a case of the cooties or the right stars not aligning, their journey as a couple didn’t begin until some time later. Fortunately for them, their love story took a turn for the epic when Sebastian proposed marriage. They needed to mark their big news with some smashing engagement photography. And hey, they chose me to capture their photos at the lovely grounds around the Folsom Powerhouse.

Getting to know someone during an engagement session never fails to surprise me. You go from having never met each other to putting a camera just inches from their faces. And it all happens in the space of just a few minutes. Thankfully, my introduction to these two was a blast. They are powered by things like laughter, hard work, fitness, microbiology. Oh, and giving plenty of love to a dog at home. And I’m a sucker for any folks who have enough humility and honesty to describe themselves as a “dorky”. Aren’t we all?

Despite some early nerves about being in front of the camera and the clouds, we set off to explore the Folsom Powerhouse State Historic Park. Perched right on the waterfront of Old Folsom, the Folsom Powerhouse features all sorts of weathered landmarks of a retired power plant. We explored brick buildings, scaffolding, bridges, power lines, as well as trails winding through the forest.

But scenery is never enough to make engagement photos shine. It takes a couple who are who beautiful inside and out, who are ready to play, and who can communicate well with each other. Come to think of it, those are many of the same ingredients for a marriage that lasts.

200 steps, one popped balloon, narrowly sidestepping a parking ticket, and 20 mosquito bites later, we reckoned that we had captured some memorable images. See for yourself…

Congratulations on your engagement, Ashley and Sebastian. I have high hopes for the two of you. And I pray that the road to your wedding day is full of the exploration, trust, and laughter that you both seem to thrive on!

We love capturing engagement photos at the Folsom Powerhouse or wherever you’d like to go. Get in touch if you’d like to capture some of your own!