Quiet In The Apple Orchard 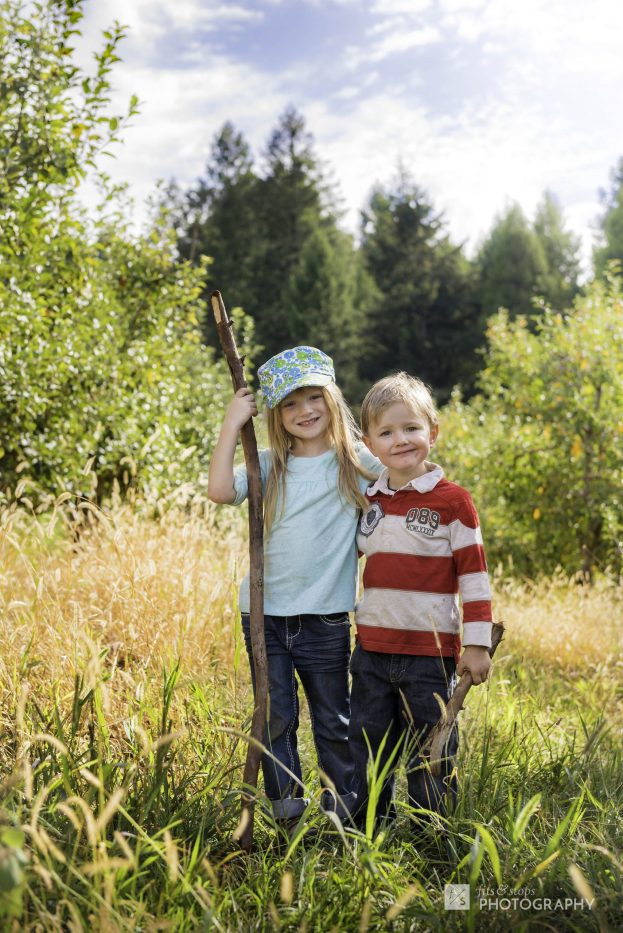 Most of my attempts at photographing portraits of my children are a disaster.

If I separate my kids and photograph them one at a time, there are good odds that I’ll get a workable photo. Put two kids in the frame and the odds plummet. Three kids? Fuggedaboutit!

One not-so-lazy Sunday afternoon, our family piled into the family van for a drive up to Apple Hill. This charming slice of the Northern California foothills is home to blackberry farms, pumpkin patches, Christmas tree farms, and the countless apple orchards for which the region is named. What must be the majority of Sacramento descends (ascends?) upon the region every fall weekend so that all quiet is evacuated from the countryside. Little family farms, quaint ponds, and fields are packed with city folk who want a taste of what this land has to offer. We were part of that great number on this particular day.

We headed a little deeper into the hills in hopes of dodging some of the otherworldly traffic, eventually connecting with some good friends at the Delfino Family Farm — better known as Kids Inc. The obvious conclusion of any trip to Kids Inc. is a giant slice of “Walkin’ Pie”, but we figured we’d make our kids work a bit for theirs; We’d first have a bit of mandatory fun on the nearby nature walk.

Moms and dads walked the kiddos down a gentle dirt path into the sort of landscape that feels sprawling to little ones. Past the grapevines, through the woods, beside the brook and along the apple orchards. My two oldest kids discovered some fallen branches along the way that quickly turned into walking sticks. Within minutes the branches had been beaten into swords, light sabers, and/or lances. They were confiscated. We returned the sticks after tears of protest and lessons learned, when the kids agreed to use them for less warlike purposes. Even my youngest grabbed another stick and dragged it behind him up a hill toward the bakery.

At one point, my two little swordfighters traipsed uphill near the apple trees themselves. I spotted a view with some great foliage, and asked the two of them if I could take their picture in the apple orchard. Ordinarily, my daughter would fidget into a new pose every half second — and my son would give me his best funny face. But something different happened this time. She put her arm around her little bro, and he gave the simplest and most natural little smirk I’ve ever seen him give. And unlike the rest of Apple Hill, there was quiet between these apple trees. It was as though our little hike had drained all the silliness from their bodies, and all that was left was compliance.

Were they tired or was it the fragrant promise of apple pie at the top of the hill? Dunno. Whatever it was, I’d like to bottle the stuff for future family portraits. Maybe that way I can get a portrait of all three little Oswalds next time.

And if not, I’ll be just fine. Being dad to these kiddos is gift enough for me.

What are your secrets for getting children to pose for the camera? Tell us in the comments below!